Are we over thinking Sherlock Holmes? 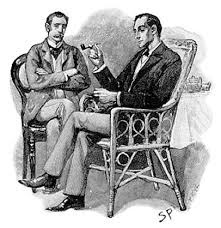 No really, maybe we are over thinking Sherlock Holmes.

As I came up as a Sherlockian most discussions were centered around details in the Canon (or lack of) and not Sherlock's proclivities.

Yea, sure, there were discussions about his sexual orientation (which I never understood) and how many times Watson was married to his moving wound many years ago. But seldom, if ever, did it become the center of the debate.
It, in and of itself, has become the backbone of many 'fans'.

Most of the time we explored history, details and 'things' within the stories; history of the martini, the 'dancing men' alphabet, what kind of dog was the 'Hound'.

So much debate (and sometimes not in a nice way) centers to much around what we desire Sherlock (or Benedict) to be rather than what we can discover just from the readings or research.

Sure, we can spend a lot of time arguing about whether or not Holmes would meet the Queen in just a sheet, or whether or not he could have been an over sexed ex-drug addict.

But in the end we are not really discussing the Canonical Sherlock Holmes.

With much of the recent, over the last several years, debate, we are trying to reshape a puzzle piece to fit into a different puzzle.

Lets all just relax a little and get back to our core.
Posted by JohnF at 8:12 AM

Email ThisBlogThis!Share to TwitterShare to FacebookShare to Pinterest
Labels: discussion, essay, Fun Stuff, What to do think?