The first I learned about Val Andrew was through a family magician friend who knew Val through the magic and entertainment circles.
Our magician friend showed me a couple of books written by Val about Sherlock Holmes.
I started a correspondence with Val in the early 90's and we were lucky enough on the Harpooners trip of '93 to have lunch with Val. He also took the time to show us some of the locations mentioned in the Canon.

This past week I finally picked up one of his books and read it.
It was a delightfully fun read and a quick one at 109 pages. 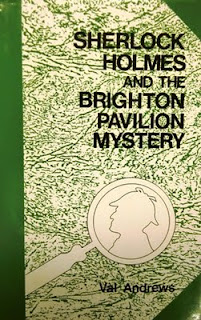 Val, born in 1926, was a music hall artist, ventriloquist and writer.
A very prolific writer about magic, writing over 1000 books and booklets on the subject.

In all of Val's 21 books about Holmes, he blends history, theatre and the arts with the world of Sherlock Holmes.

In the two books of his that I have now read (well, actually working on the second now), Holmes, being a little older when the stories take place, comes off more jovial and easy going than he can sometimes appear, and this adds a freshness to the stories.


Vals style is close enough in language to invoke the Victorian era, but not so close to Doyle's that you feel he is trying to copy it.
It was a pleasure getting to meet Val, a gentleman and artist and I hope you check out some of his books. 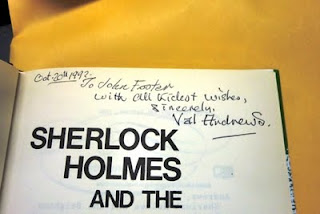