Did you have dinner or supper? 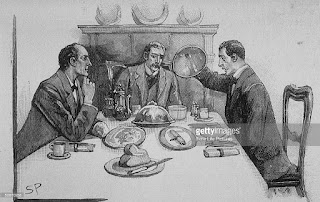 “Then I suggest that we turn our dinner into a supper and follow up this clue while it is still hot.” Sherlock Holmes.

Although we now use the words dinner and supper interchangeably to mean the same thing, our largest meal of the day. It has not always been as such.
Well, at least in certain cultures.

Most of us have grown up in a society that now runs on three meals a day; breakfast, lunch and dinner.
At least that is the way my family has always done it.

Breakfast, usually oatmeal or cereal (with bacon and eggs on weekends).

Lunch, what ever mom packed for school or the lunch ladies cooked.

And dinner, when dad got home from work, and our biggest meal of the day.

I don't remember us ever having a distinction between the use of the words dinner or supper, although I seem to have been called to more 'dinner times' than 'supper times'.

For much of the English speaking world dinner is the biggest meal of the day, usually taken sometime between noon and early evening.

And supper would be a lighter meal taken later in the evening. The etymology of supper is usually seen to come from some form of soup. Which would suggest a light meal.

For much of it's modern history the time of 'dinner' seemed to keep getting pushed back, until what had been a meal taken at two or three in the afternoon, to now easily taking place much later, at say six or seven. One survey by an Australian winemaker found that the average time in the UK for the evening meal is now about 7:47 pm.

Throw into the mix 'Tea Time' and what time that could take place, and what is served with 'Tea Time' and it can get real confusing.
Where I have always assumed 'Tea Time' was at 4pm, source suggest it can also be taken some time between 5 and 7.

It is associated with the working class and is typically eaten between 5 pm and 7 pm. In the North of England, North and South Wales, the English Midlands, Scotland and in rural and working class areas of Northern Ireland and the Republic of Ireland, people traditionally call their midday meal dinner and their evening meal tea(served around 6 pm), whereas the upper social classes would call the midday meal lunch or luncheon and the evening meal (served after 7 pm) dinner (if formal) or supper (if informal). Source

So, with all that said, there doesn't seem to be any firm set rules of when you call what, it just depends on where you grow up.

With that said; what prompted this inquiry was when Sherlock Holmes says, “Very glad to see you. I dine at seven. There is a woodcock, I believe. By the way, in view of recent occurrences, perhaps I ought to ask Mrs. Hudson to examine its crop.”

And then a few minutes later Holmes and Watson have the following exchange; “It is quite certain that he knows nothing whatever about the matter. Are you hungry, Watson?”
“Not particularly.”
“Then I suggest that we turn our dinner into a supper and follow up this clue while it is still hot.'

This suggests that, one; dinner was going to be Holmes big meal of the day. Two; it was going to be rather late, seven. And three; super would be a very late, a much lighter meal (maybe cold woodcock sandwiches?).

We must also remember that this habit of assigning times to meals can also be considered an industrial age habit and mostly, as suggested, a middle and upper class tradition. Poor countries and rural workers were more likely to take the meals when time and abundance allowed.

These are the Canonical discussion that made me wonder how we use the words dinner and supper.

BLUE ends with Holmes saying to Watson, "If you will have the goodness to touch the bell, Doctor, we will begin another investigation, in which, also a bird will be the chief feature.”

So, we know their little expedition didn't even start till at least seven. Probably took at least an hour or so. So supper was sometime after 8 or 9pm.

At this point in the story I see an image of the long suffering Mrs. Hudson more as she is portrayed in 'Sherlock' than in Granada's Sherlock Holmes.