The Adventure of the Creeping Man.

This coming Friday I will once again have the pleasure of attending a meeting with the Chester Baskerville Society in Chester Ill. 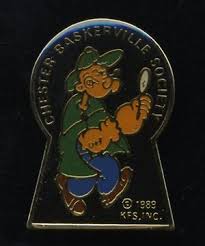 One of the cases to be discussed on Friday will being The Adventure of the Creeping Man. And because I am not an illuminating source myself, I some times need to reread the source material to make sure I get most of the things I discuss straight.
And so I did with CREE.

Some of the richest material in the Canon can be found in the first couple of paragraphs. Especially as it pertains to the relationship between Holmes and Watson. Usually those first paragraphs are often my favorite parts of the story. I love Baker St. as the setting and the things that take place there. This also proves to be the case with the Creeping Man.

The story was published in 1923, and Watson states in the first paragraph; ". . .  twenty years ago agitated the university and were echoed . . ." and clearly stating in the next paragraph that in took place in Sept. of 1903. So we can accept the date.

Holmes was not quite 50 years old, and as Watson states, this was one of his last cases. His retirement was not far away.

We have often assumed by various references that Holmes and Watson did not see a lot of each other once Holmes moved to Sussex. Watson even suggests the the relationship between the two men was rather peculiar.

And when you read that line in the third paragraph of CREE, we should probably start wondering if Watson had started to tire of his role. Was the relationship starting to get strained between the two?
In the paragraph that follows, Watson does not describe how he sees himself in that role in a very good light.

"The relations between us in those latter days were peculiar. He was a man of habits, narrow and concentrated habits, and I had become one of them. As an institution I was like the violin, the shag tobacco, the old black pipe, the index books, and others perhaps less excusable. When it was a case of active work and a comrade was needed upon whose nerve he could place some reliance, my role was obvious. But apart from this I had uses. I was a whetstone for his mind. I stimulated him. He liked to think aloud in my presence. His remarks could hardly be said to be made to me—many of them would have been as appropriately addressed to his bedstead—but none the less, having formed the habit, it had become in some way helpful that I should register and interject. If I irritated him by a certain methodical slowness in my mentality, that irritation served only to make his own flame-like intuitions and impressions flash up the more vividly and swiftly. Such was my humble role in our alliance."

Such does not sound like a man who was thrilled to receive the message; "Come at once if convenient—if inconvenient come all the same. — S. H."
While to most Sherlockians this is one of our favorite quotes from the Canon, it can be suggested that Watson may not have been as excited as we would like to think it recieving it.

In the next paragraph Watson continues; "With a wave of his hand he indicated my old armchair, but otherwise for half an hour he gave no sign that he was aware of my presence."
We are not surprised by this behavior from Holmes, as we have come to expect this posture from Holmes, but one can sense some annoyance in Watsons tone at this dissmissal.
Watson doesn't seem to relish his role as much as we may have once believed.
Was he tired of being expected to come if inconvenient all the same?
Had his practice and his private life made coming if inconvenient difficult? (We know once again that Watson was married.)
Had his priorities changed?
Did he not require the stimulation of the chase as much as he once did?

The reasons are really not all that important to us unless we look at this growing distance between the two as a gradual cooling of the friendship that we as Sherlockians may not wish to consider.

I don't get the feeling in those first two paragraphs that the return to Baker St. was as comforting a ritual for Watson as it had once been.
Like his old armchair, had the relationship become worn and tattered?

A few paragraphs later, after Holmes as some what explained the case to him Watson says; "I sank back in my chair in some disappointment. Was it for so trivial a question as this that I had been summoned from my work?"

From that point on (except while drinking that "bottle of the famous vintage of which Holmes had spoken . . .") Watson keeps suggesting solutions that would allow him to escape as soon as possible.
He is not excited to be involved!
Has Watson tired of 'The Game'?

Most Chronologies show only two more cases recorded by Watson after CREE. The next would be six years later, with the last one five years after that. And if we are good Sherlockians we might assume that one or two unknown ones still lie in that old tin box, but maybe not as many as we would like to believe.

None of us like to think of friendships drifting apart, and if we are honest, it really unsettles us if it happens to Holmes and Watson, even more so if it is not just because of distance.

Was it an attempt by Holmes to rekindle what once was?

What was their relationship like at the time of CREE?

Maybe I have read too much between the lines. But, hey! That's what playing the game is all about.

Another wonderful quote from this case would be; "It’s surely time that I disappeared into that little farm of my dreams."

And I leave you with one thought; Did no one think to talk to the coachman earlier?
"The uproar had brought the sleepy and astonished coachman from his room above the stables. “I’m not surprised,” said he, shaking his head. “I’ve seen him at it before. I knew the dog would get him sooner or later.”"

But to leave on a happier note, here are two images that may make us imagine where Holmes and Watson stayed on this adventure. Possible locations for the Chequers. 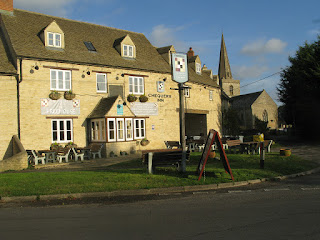 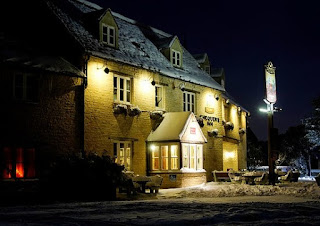 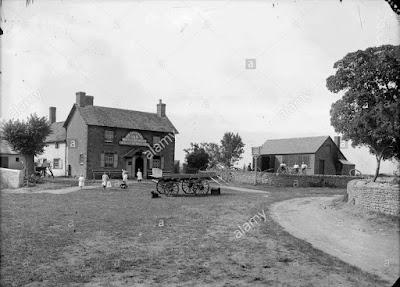 Email ThisBlogThis!Share to TwitterShare to FacebookShare to Pinterest
Labels: essay, Playing the Game, The Canon, What to do think?