Browsing the Web. The Harpooners of the Sea Unicron

I came across this image. 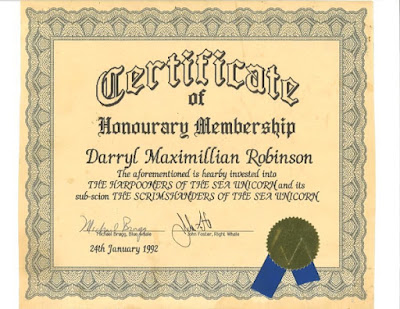 Many years ago the Harpooners helped and supported an actor, Darryl Maximillian Robinson pull of a production of  The Final Problem.

He put the production on at our local pub as a preview to the stage production.

Darryl Maximillian Robinson could pull off one of the best British accents we had ever heard.

Usually when someone did something of a Sherlockian nature with the HSU; make a presentation, help with logistics, etc., we would make them and honorary member. Jeremy Brett recieved one.

Back then the Harpooners had many fun awards. Since their name came from a seafaring Sherlockian tale, all the awards were whales or something nautical.

The Games Afloat. So we had name issues?

Way back in 1993 The Harpooners of the Sea Unicorn brought the first (two) Sherlockain conventions to the St Louis area.
We chose to call it The Games Afloat. Pretty original we thought. Captures the sense of Playing the Game.
We invited speakers from all the local societies, and then some.

But now we are being told we had naming issues. To quote  "which doesn't have the same name issues as its predecessors", referring to upcoming Holmes in the Heartland event.

Of course we had two conventions with that name, so I guess we suffered twice.

And this quote about namin issues comes from someone who claims to be a non-elitist Sherlockian.

We called it 'The Games Afloat' because we were holding the convention on a Victorian era Showboat called the Goldenrod.
Pretty cool idea, we thought. But I guess we did not understand that we could not use the term Afloat because the boat was tied to a dock. Apparently Afloat and floating doesn't mean the same thing.
But he goes on to say, (which, well, technically it was on a floating riverboat, but the boat didn't leave the dock, as I recall).  So, name police, what was the problem.

So tell me again why The Games Afloat is a naming issue?

I guess we should have called it The Games tied to the dock. Or, If we were moving we would be the Games Afloat, but we are not convention.

Perhaps if the boat had left the dock we could have had the first Sherlockian dress up on water skis!

Considering the Illinois name police is always calling out others who make distinctions reflecting on differences in Sherlock celebrations, if you didn't know the source you would be surprised.

Sometimes those who claim to be the least elitist are, well, perhaps the most.

Well that's what happens when us newbies (back then) try to fit in with the elite.

Call out the Sherlockian naming police. I think the headquarters are somewhere in Illinois.

Not sure why he couldn't just say he was looking forward to Holmes in the Heartland without finding issues with the other area conventions.

Seven Degrees of Sherlock Holmes - Who would have thought, Jim Nabors.

If you grew up in the 60's, you knew who Jim Nabors was. Either from his sit-com or from his singing. 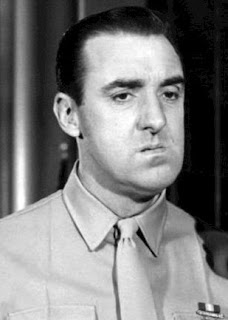 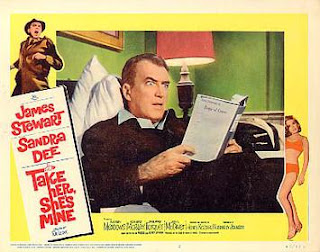 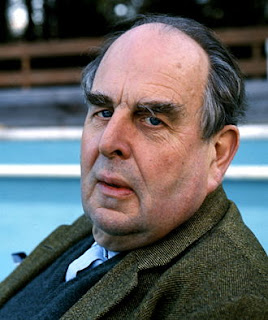 Who played Mycroft Holmes in 'A Study in Terror' 1965 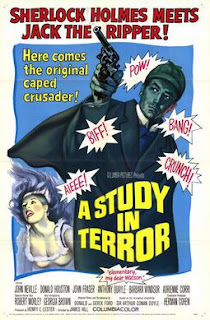 Finally, something to talk about. . .

There, I am done talking about it.
Posted by JohnF at 6:27 AM No comments:

Email ThisBlogThis!Share to TwitterShare to FacebookShare to Pinterest
Labels: Movies 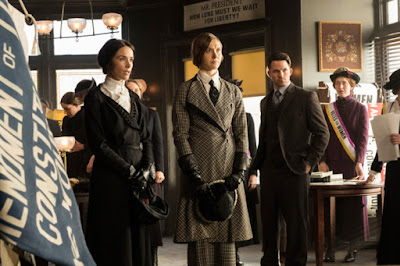 As I mentioned yesterday, this weeks episode of Timeless was called 'Mrs. Sherlock Holmes'.

And since the show likes to blend fact with fiction I was not expecting the show to have come up with another fictional character to add to its leads.

Instead this episode focused on the abilities of Mary Grace Humiston.
An early 20th century woman who made her name known as a lawyer and part time detective.

While we will never know if Ms. Humistons personality was indeed Sherlockian, they played that for all it was worth in the episode.
Enough so that you could see a show built around 'Mrs. Sherlock Holmes' and the very Sherlockian way she was played.
Well done.
One thing I like about shows the blend fact in fiction is that they make me want to go find out how much of the fact is actually fact and how much is fiction.
Posted by JohnF at 6:28 AM 1 comment: