Harpooners of the Sea Unicorn #328 - FINA

Attended the latest meeting of the Harpooners of the Sea Unicorn (HSU), who have now been at it for 28 years. Most of them good years. 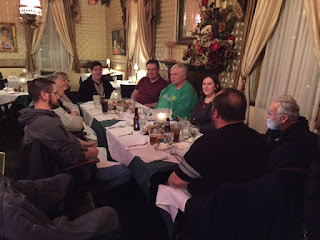 I believe two records were set at this meeting.
The first was the attempt (successful attempt) to live broadcast the meeting on Facebook. 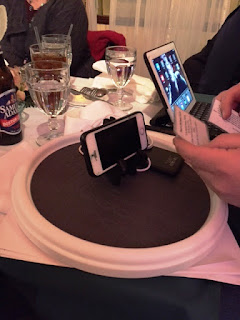 While a few technical issues need to be worked out, it seemed to be a success in that a few comments were made during the meeting from other states.

The second record set I believe was in the number of presentations or papers on FINA.
We had four very different presentations made on things to be found in FINA.
The gamut running from gaming matrix to how many times things happened in three's in the story.
BSI member Bill Cochran was present and as usual gave a very good paper.

Discussed was how much Holmes had planned out the trip that concluded the Final Problem and how much was left to chance.
While first reading FINA we are lead to believe that Holmes' death was just the end result of this continental chase. But after further reading, as suggested by Bill, the entire process was well planned out by Holmes to bring about the result that happened.
I will post Bill's (and the others) paper here once it comes out in the newsletter.

When reading these tales over again for each meeting I always try to spot something that I had not noticed before, something I think could make a good topic of discussion.

There probably is not much that has not been covered in FINA, as would also be the case with the other 59 stories.
But I came across something I had not heard discussed before ( which may just mean I had not come across some one's thoughts on the subject ).
Several paragraphs in, when Holmes is telling Watson about Moriarty this information is given;
'. . . where he set up as an army coach."
We have heard a lot about the papers Moriarty contributed to science. And that he had been a professor of Mathematics at some smaller university.

But I have never read or heard any discussion of him being an army coach.
Now I doubt that that meant we would have seen him coaching the football team at an earlier Army/Navy match.

But I can imagine several teaching positions in the army that would require mathematics skills;
artillery, codes/intelligence, weather, etc.
While the military at this time was not as advanced technically as we are now, mathematics would still have played a large role.
Are connections while teaching for the army how Moriarty and Moran came together?

It was a very good meeting and made me want to go back and read once again FINA.
Posted by JohnF at 7:40 AM 2 comments:

IHOSE, as with most of what they do, this should be fun TRIFLES! 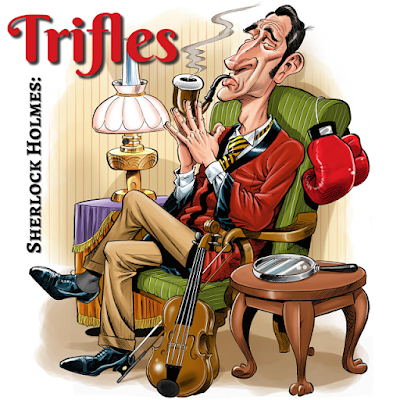 Hey guys, is this image a Tom Richmond?
Posted by JohnF at 7:22 AM 1 comment:

Email ThisBlogThis!Share to TwitterShare to FacebookShare to Pinterest
Labels: Art Work, IHOSE., Other Blogs, others essay, others reviews

Where did he get his inspiration? 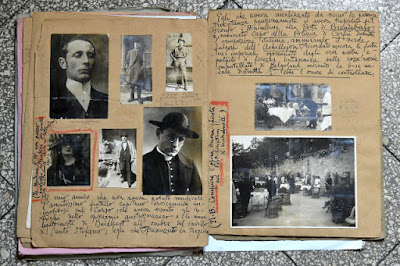 The Italian Sherlock Holmes: Eccentric policeman who cracked his cases in disguise

Source
Posted by JohnF at 7:42 AM No comments:

Email ThisBlogThis!Share to TwitterShare to FacebookShare to Pinterest
Labels: Other Blogs, others essay, others reviews, Sherlockian connections

'There's something about Mary'- Sherlock, the end.

Well, here we are. After all this waiting and anticipating we have what appears to be the end of 'Sherlock'.
Not Sherlock Holmes, just Sherlock.

For better or worse, there it is.

We have been told that the key people involved are "Artists". And that 'Sherlock' was art.

Well, like with all art, and many artists (whether other people claim them as such, or it is a self given title) there is good art and bad art and using the often used quote, "Art is in the eye of the beholder."

While not being 'bad' art, it is not museum worthy.

For me 'Sherlock' is a show that did not meet up to its potential, nor do I think it achieved what it set out to do or could possibly have done. (It is not good when before you see they final episode they have to have a piece telling you why it was made the way it was.)

The first year suggested hope and potential, and while there were a few bright spots along the way it never dazzled as it should have. All the makings were there, but the light never came on all the way.
Wonderful actors playing the key roles. Wonderful sets and locations. The budget to go along with it.
Source material with infinite possibilities, and what at first appeared to be writers who loved the source.

As I said way back in 2010 when it all started, Martin Freeman and Benedict Cumberbatch are two of the best things to happen to Sherlock Holmes in a very long time. Their talents and skills can not be over looked as very good choices to play Holmes and Watson whether in a modern era of 1895.
They had the theatrical flare to pull off the larger than life characters they were asked to play.
And time after time they did that. But they were never allowed to complete that portrayal throughout the series run, at least not for me.
These remain two of my favorite actors in this day and age and I look forward to seeing their other works.

But when it really comes right down to it we have to decide if these portrayals of Holmes and Watson come close to matching the images we have created in our, using a much over used phrase of late, 'brain attic'.
If we take a still photo of these two actors as Holmes and Watson it is easy to imagine both as those to Canonical individuals.
But once Cumberbatch's Holmes goes into his 'highly functional sociopath' portrayal the bubble bursts for me.

The enjoyment of the Canon for me is the individual cases that Holmes is asked to solve, with just little pieces of back story thrown in to create a bigger image for us over time.

While many of the Canon based cases are mentioned in 'Sherlock' most it seems,  just like 'Elementary' is accused of doing, are thrown in as Canonical bait to keep us biting.

Unfortunately for all that was great, yes I said great, about 'Sherlock', there was just as much that wasn't.

We hardly ever witnessed Sherlock doing good. And, again for me, Canonically Holmes in the end was about doing good.

While we are all left to decide for ourselves what is good art we must also realize that we get to chose who we think good artists are.
And please artist's either use brushes or finger paints, not both.

Why did I title this essay 'There's something about Mary."? Well because I thought she delivered the best line of the whole series, all four years.

I will do my best to quote the whole thing here at the end.

"A junky who gets high on solving crime.
A doctor who never came home from the war.

Well you listen to me.
Who you are doesn't really matter.
It's all about the legend, the stories, the adventures.
The last refuge for the desperate, the unloved, the persecuted.
There is a final court of appeal for everyone.

When life gets to strange, to impossible, to frightening there is always one last hope.

When all else fails, there are two men sitting arguing in a scruffy flat, like they have always been there and they always will be the best and wisest men I have ever known.

This should have been the guide lines for 'Sherlock' all along.
This is the path they should have gone down modern era or not. Using cell phones, the patch and texting. 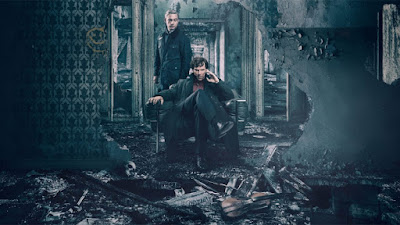 Holmes and Watson - It seems they have started filming 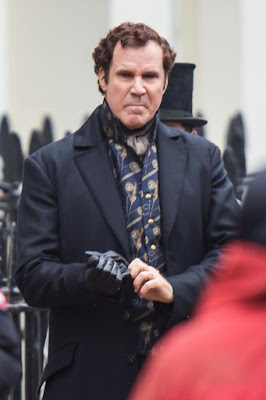 I hope it is not as over the top as Will can sometimes go. 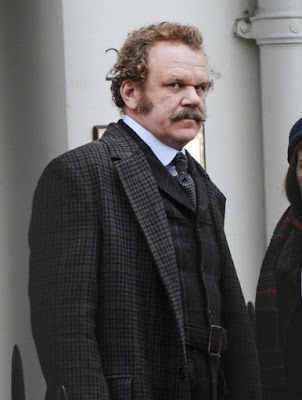 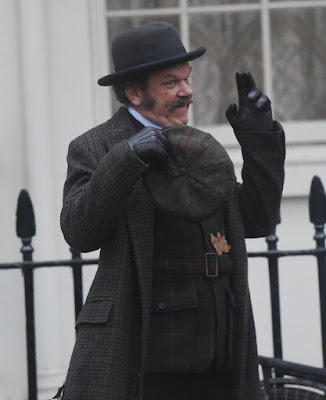