The Private Life of Sherlock Holmes

But with my use of Amazon Prime I am finding several Sherlock Holmes movies I have never seen before available to watch for free. And luckily this was one. 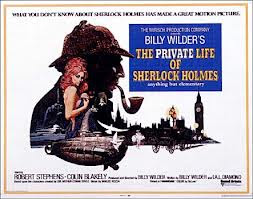 The movie stars Robert Stephens as Holmes, with Colin Blakely as Watson and one of my favorites and a past Sherlock himself, Christopher Lee, as Mycroft.

The film is divided into two parts.

The first seems to want to set some things clear about Holmes and Watson and has very little to do with the actual case that follows.

The second part is a mystery about a missing scientist and follows ( and could be the inspiration for ) much of the plot of Without a Clue. 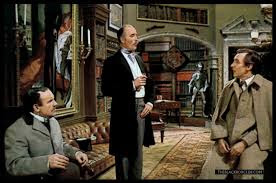 Soon critics feel the film falls apart at this point because the movie then just becomes Sherlock Holmes on another case, but, isn't that the point of Sherlock Holmes after all?

Historically there are suppose to be two more 'episodes' in the movie, but they were removed once the movie went into wider release.

Watson is played wonderfully high-strung by Blakely and is definitely there for a comic element.

The sets and scenes are fantastic, being filmed at Pinewood Studios and on location in Scotland.

Although Stephens will not go down as one of my favorite Holmes, his performance did grow on me as the movie went along, showing a range of emotion modern viewers of the new 'Holmes' would find appealing.

With that said, I give it four pipes for fun.

A wonderful piece by Chris Allen at Buddy2Blogger

I know I will check out his books. 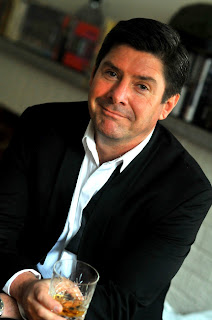 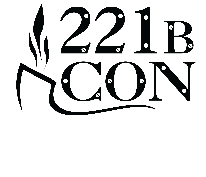 Of course, most of you already know this. . .

By the mid-1980s, advancements in computer graphics programs allowed matte painters to work in the digital realm. The first digital matte shot was created by painter Chris Evansin 1985 for Young Sherlock Holmes for a scene featuring a computer-graphics (CG) animation of a knight leaping from a stained-glass window. Evans first painted the window in acrylics, then scanned the painting into LucasFilm’s Pixar system for further digital manipulation. The computer animation (another first) blended perfectly with the digital matte, something a traditional matte painting could not have accomplished

Dinosaurs! (1966, an audio dramatic version of The Lost World adapted and directed by Ronald Liss and recorded by permission of the Estate of Sir Arthur Conan Doyle; MGM/Leo the Lion Records C/CH-1016)

in 1966, Basil Rathbone played Professor Challenger in Dinosaurs!, a radio-style audio adaptation of The Lost World released on MGM/Leo the Lion Records C/CH-1016. In this version, the character of Lord John Roxton was not included.

Basil Rathbone as someone other than Holmes in a Doyle production. 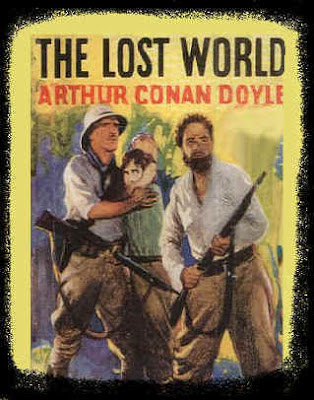 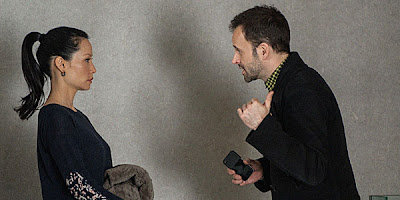 I am not one hundred percent sure how I feel about this episode yet, but for now I have to say it was one of my least favorite so far.

The episode centers on 'Watson's' attempts and schooling to become 'Sherlock's' partner as a consulting detective.

After the introduction of a 6 month old crime, we then skip to 'Watson' attempting to break into and hot wire a car. We find out it is part of her training.

We then move to 'Holmes' being asked to take a case by his father, this case being the disappearance of a young woman some six months earlier. While discussing the case with the client, 'Holmes' comes  across another case involving the pushing of a young women into an oncoming train. Instead of 'Holmes' excepting the case, we see him passing it off to 'Watson', leaving us to assume he finds it to trivial or to related to his father or a good case for 'Watson' to learn on.

As Sherlockians most of us probably assume he has already found a relationship between the two or at least believes he has already figured it out so therefore can test 'Watson's' conclusions.

We find none of this to be true as the case goes on.

So they go their separate ways and attempt to solve their individual crimes.

After a brief interview with the missing women's husband, 'Watson' comes away with a hunch, or gut feeling that the man is the one responsible of her disappearance. No facts or deductions to back this up.

Well, I don't want to summarize the whole episode, but for me at about this point the whole story becomes pretty convoluted.

My first problem with the show is 'Watson' trying to become a consulting detective. Canonically Watson is a catalyst to Holmes, a steadfast companion and a reliable "I-got-your-back" person. Holmes is the Blood hound and Watson is the Bull dog. Most attempts by Watson, in the Canon, to become a detective result in disappointment.

Realizing in this day and age any female character can no longer be used just as eye-candy and must have (and should have) and active and equal roll, the results in this episode were disappointing.
Up until this point 'Watson' had been played and written as a very smart women who was not only able to be a spring board for 'Holmes', but was also able to actively contribute to the cases she was involved in. Her medical knowledge, and even her observation skills were of great help in many of the earlier episodes.

But tonight we seemed to be more on a path of a 'Sherlock' clone. Instead of her becoming the moral, social and emotional rock of the show, tonight she became another Sherlock wanna-be. Even going so far as to distance herself from her friends and other relationships. Watson was the social one of the Canon, not the isolated thinking machine.

It has become a little tiresome in the show when clues are accidentally stumbled upon, but even more so tonight.

Not a whole lot of deduction was going on this evening.

The best use of observation tonight was in the references to the violin busker.

The show resulted in no firm conclusion, and in the end we are not sure why or how the young women was murdered. In the end, did the trunk really have anything to do with the case?
'Holmes' said no.
In this day and age when police, at least on TV, automatically check all emails and computers, the finding of the emails from the late women six months after the fact should get 'Gregson' fired.

When the episode first started I was hoping for something along the lines of Hound where Holmes sends Watson off to gather clues because he is unavailable at the moment. I realize for modern sensibilities it would have to be rewritten to place Watson in a strong light, but it could have been done.

Not only did this episode also lack the hookers, it also lacked the humor that has become a part of the show.

The acting was still good, although I am finding Millers 'Holmes' is not maturing very much.

But over all, at this point, I can only give the episode -

The country house in times of war. 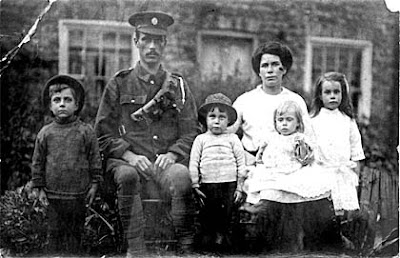 Many years ago, when I was much more involved with the Sherlockian Society 'Harpooners of the Sea Unicorn', I designed a stein for our members, which included their name and membership status, which they could take home and display, or leave at our English Pub meeting place for use during meetings.
While, today, exploring web data on the Harpooners I came across this add on 'ebay'.
I remember the name on the stein, while not remembering the person himself.
The stein has 'C.M.' on it which meant he was a Charter Member, having joined in the first year of the societies founding, 1989.
Having started the stein making in around 1990, it is one pretty old piece of memorabilia for the Harpooners.
Now, I don't remember any scandal in the club that involved the person named on the stein, so I can't imagine why they would want to sell it.
If you look hard enough, it is amazing what you find. 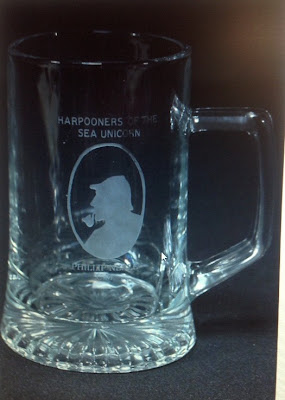 If I remember correctly, we used the money we made on them (which wasn't much) to help fund the club.
We sold them for $18.95.

So, he isn't making to much on it.

Sorry they need to sell.

Found this site (actually a while ago, while working on another paper ) while doing research for an upcoming paper. Lots of fun stuff. 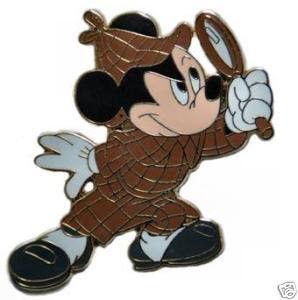 Will be back in a couple of days.

If you know Phillip Shreffler you know of what she speaks.

Tell it like it is Babe.
Posted by JohnF at 1:58 PM No comments:

Email ThisBlogThis!Share to TwitterShare to FacebookShare to Pinterest
Labels: essay, Other Blogs 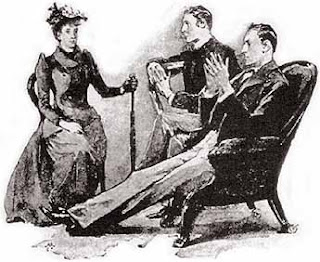 Email ThisBlogThis!Share to TwitterShare to FacebookShare to Pinterest
Labels: Books, Harpooners of the Sea Unicorn 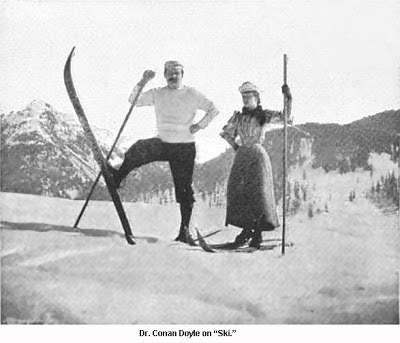 . . . to spend a little time in the snow this week. I look forward to getting back in the swing here tomorrow.


Conan Doyle
Lovers of Swiss ski holidays have the creator of Sherlock Holmes, Sir Arthur Conan Doyle to thank. He had fallen in love with the sport in Norway and thought Switzerland offered the perfect terrain. He imported some skis and encouraged two Swiss brothers to join him. They practised at night to avoid being teased by the locals. Conan Doyle later wrote: “I am convinced that the time will come when hundreds of English men will come to Switzerland for the skiing season.”