The Criminal Mastermind of Baker Street by Rob Nunn - A review. 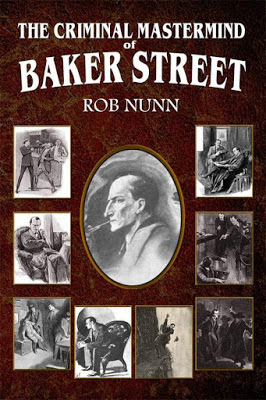 Like I said in my previous post, this is not a book I would have picked up on my own.

I don't like reading books about Holmes that takes him out of my comfort zone.

Rob asked my to take a look at his first book and give my thoughts.

What Rob has done is take a fun exploration into Holmes career as if he had taken that once suggested path down the road to a career in crime.

Rob has connected in some way all sixty of the stories into a web of crime that only Moriarty could appreciate.
Smoothly blending many of the habits and traits we love about Holmes  while adding an almost noble veneer to a mob boss in Victorian London.

He has not taken the heart that is inside Holmes and Watson and made them Moriarty like in that of a one dimensional crime boss, but instead has tried to make their new life explainable and acceptable.

Most of the places and characters we love make an appearance in the book and make it feel familiar.

The Holmes in Criminal Mastermind is a crime boss for the little people, with at times a Robin Hood like air.

If I am to find any faults with Robs first book it would be that on a couple of occasions the conclusions seemed abbreviated or too quick to come to an end.

And with any tale of Holmes and Watson I would have liked to have seen them written in Watson's hand.

Rob's writing is very good and you can tell he has a background in education and a love for his subject.

I enjoyed the book and look forward to more works from Rob Nunn.
Posted by JohnF at 10:09 AM No comments: