On the Trail of Sherlock Holmes - from the Wall Street Journal 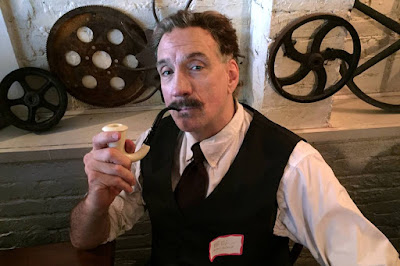 
I don’t believe I’d ever read any of Sir Arthur Conan Doyle’s Sherlock Holmes stories until the day before I attended a lunch held by The Priory Scholars of NYC, a Sherlock Holmes society, on July 16.
Nonetheless, several attendees who gathered at the Churchill Tavern on East 28th Street, where Winston Churchill’s wartime speeches were piped through the bathroom sound system, assured me I’m an honorary Sherlockian through my father.
The Priory Scholars is a scion society of the Baker Street Irregulars, an organization of Sherlock Holmes enthusiasts founded in 1934 by Christopher Morley, a journalist and novelist. And of which my father was a member.
Indeed, I remember my dad’s pride when he was asked, probably in the late 70s or early 80s, by Julian Wolff, the head of the group at the time, to recite the “Musgrave Ritual” from the Conan Doyle short story “The Adventure of the Musgrave Ritual.”
To this day, Dr. Wolff’s note, encased in a protective plastic sheath, sits on the shelf of my father’s library.
I also looked up the Baker Street Irregulars website and discovered my father seated in the front row of the BSI 1984 dinner. He was rocking a curved-stem pipe whose bowl he’d carved himself with the likeness of the great Holmes.
Not that I wouldn’t have been welcomed with open arms in any case. And not just because I was a member of the press. Even though that wasn’t held against me. Indeed, someone at my table promptly quoted Holmes to Watson in “The Adventure of the Six Napoleons”: “The press, Watson, is a most valuable institution, if you only know how to use it.” 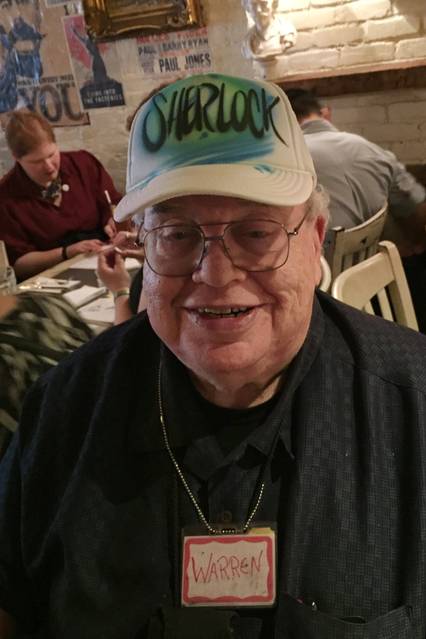 ENLARGE
Warren Randall at a Priory Scholars of NYC lunch. PHOTO: RALPH GARDNER JR./THE WALL STREET JOURNAL
My sense was that the Priory Scholars of NYC was a highly inclusive, hyper companionable organization. Indeed, the group’s affection for “the canon,” the 56 Sherlock Holmes short stories and four novels written by Conan Doyle, only partially accounts for what brings people to its four-times-a-year meetings.
“The stories are fundamentally about friendship,” explained Christopher Zordan, a chemist and the group’s “Economics Master,” or treasurer. “Everybody likes that underlying theme.”
Added Robert Katz, a pathologist and Holmes lecturer, “There’s a big cluster of groups in the tri-state area. You could literally be going to some Sherlock Holmes event in the eastern half of the United States every weekend of the year if you felt like it.”
The work under discussion at the summer meeting was Conan Doyle’s “The Adventure of the Cardboard Box.” It’s a somewhat macabre tale that involves the arrival in the mail of a parcel containing two severed human ears.
I was taken by the economy of the language, which is apparently part of the Holmes canon’s appeal. “If you read other Victorian stories,” Mr. Zordan explained, “they’re very flowery. [The canon] feels like it was written recently. There’s a bit where Watson says, ‘And I blew his brains out.’”
The meeting was called to order with author Elizabeth Crowens reporting on the success of a book signing for her debut novel, “Silent Meridian,” a time-traveling work whose characters include Sir Arthur Conan Doyle.
Next came a series of witty toasts of which Holmes would have been proud. An appreciation for a good Burgundy or even a robust Bloody Mary also seems to attract students of the detective in the deerstalker cap.
“Drinking is a very popular sport among Sherlockians,” attested Judith Freeman, the Priory Scholars’ “Headmistress.”
Among the toast givers, with the help of a picture frame as a prop, were Chelsea Moquinand Finn Upham, young Brooklynites who host “Three Patch Podcast.” Ms. Moquin described it as “Get somebody very inebriated and try to tell one of the Arthur Conan Doyle stories.”
” 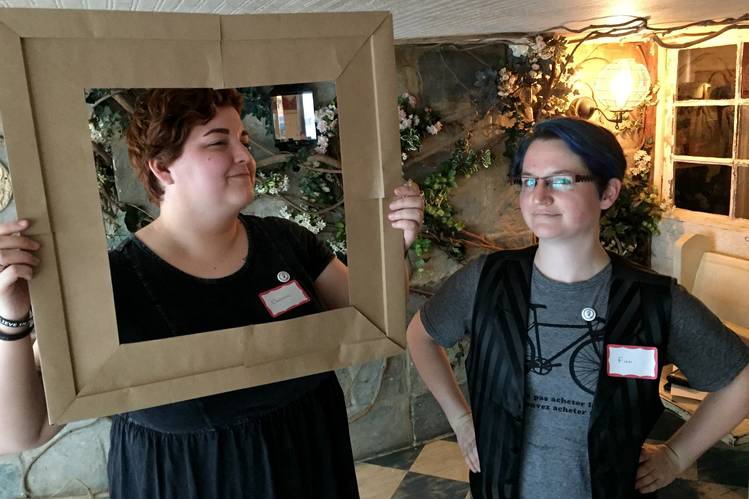 ENLARGE
Chelsea Moquin, left, and Finn Upham, hosts of a Sherlock Holmes podcast. PHOTO: RALPH GARDNER JR./THE WALL STREET JOURNAL
The picture frame was a reference to a portrait mentioned at the start of “The Adventure of the Cardboard Box.” “There’s been a lot of effort to bring together the younger crowd and the older crowd,” Ms. Moquin said.
After lunch was served the group got down to the serious business of the afternoon—starting with a quiz about the reading. “The women come in first more than the men,” reported Priory regular Marc Sawyer. And they did.
The quiz was followed by a discussion of the work, described by someone as the “eeriest case in the canon.”
He sounded quite learned until it was pointed out to me that the gentleman was making a pun. Eeriest was spelled “ear-iest.” 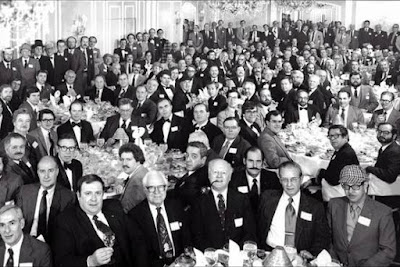 Ralph Gardner Jr's father is center front with pipe.
Posted by JohnF at 10:43 AM No comments:

Have you ever heard of this one. . . . The Baskerville Arms Hotel

Close to the Black Mountains, the Brecon Beacons and Offa's Dyke path and within a short walking distance of the River Wye, dishes are prepared from fresh local produce.
Here you will find a homely 'locals bar' atmosphere. 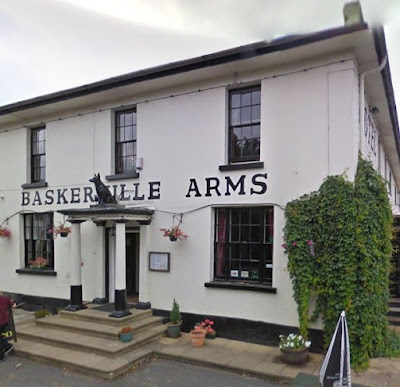 The Baskerville Arms
Posted by JohnF at 12:59 PM No comments:

Will both 'Toby's' appear in the same episode? 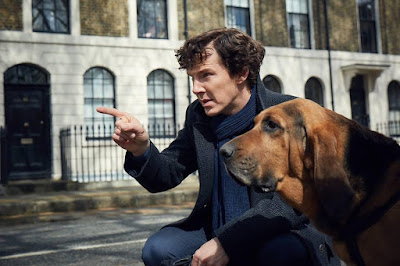 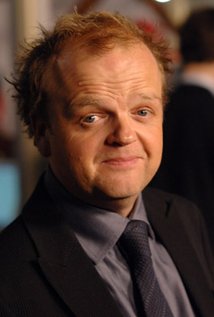 Email ThisBlogThis!Share to TwitterShare to FacebookShare to Pinterest
Labels: 'Sherlock'

I was going to post some recent pictures of Benedict Cumberbatch as Sherlock for the up coming season.
But I chose not to get drawn into all the tease that goes on with each upcoming season, however far apart they are.
I am going to wait for something definite. Or maybe not.
Posted by JohnF at 1:26 PM No comments: 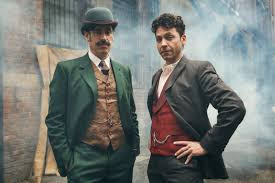 Now I don't mind a little artistic license in the handling of shows about times or characters I like and follow. Rarely does any movie or TV show completely follow facts or history.

My main motivation, besides being entertained, in watching shows like this is that they make me want to learn more about the actual facts behind the story or people portrayed. I will go look up details on things taking place in the story to see how far astray the artistic license went.

But for some reason Houdini and Doyle has not done that for me.
It may be that I am not all the interested in Houdini and that I do not particularly like the portrayal of Doyle.
Or maybe it is just that they stray just a little too far away for historic fact about the times and the two main characters.

I am not sure, but this week I found myself deleting from the DVR a couple episodes I had not seen to make room for Women’s Gymnastics.

There were a few things I liked about the show, but most of that had to do with the sets and the atmosphere of the episodes.

Oh well, I can at least look forward to the start of Elementary in a few months and Sherlock in a couple of years.
Posted by JohnF at 9:04 AM 5 comments: