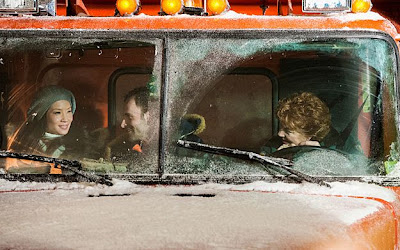 For me, this was one of the best episodes yet.
Lot of Sherlockian references, some good humor and a fairly fun case.

These two crimes turn out to be a cover for a bigger heist.

Early on we meet 'Mrs. Hudson', wonderfully played by Candis Cayne, who will probably turn out to continue to be the new housekeeper. A friend of Holmes', she is a transgender women having relationship problems, whom Holmes invites to stay at "Baker St." till things calm down. She soon organizes the house in such away that even the picky Holmes finds acceptable. (Miller has some great facial expressions while pondering the new room arrangement.) Watson also finds her likable which should cement her return.
Although not the prim older woman we usually associate with Mrs. Hudson, she could become a fun character and fits in well with all the other dysfunction.
She happens to be very proficient in Greek which could be a reference to 'the Greek Interpreter."

We have the familiar quote, "Life is infinitely stranger than anything the mind of man could invent', from 'Case of Identity.'

We also see in this episode the use of one crime or incident to cover up or hide another. This ploy is use in 'the Redheaded League'.

I think 'Holmes' reference to not reporting the stolen phones to the police is a reference to not making up for the deficiencies of the police (and I will find out which case that it is mentioned in and re-post it here.) Here it is, from BLUE, “After all, Watson,” said Holmes, reaching up his hand for his clay pipe, “I am not retained by the police to supply their deficiencies. "

From 'Mrs. Hudson, who comments on having read the monograph, a reference to the work, 'Practical Handbook of Bee Culture, with some Observations upon the Segregation of the Queen.' from
'His Last Bow.'

We also have 'Holmes' observing Bell with the defendant and commenting on Bells abilities as an actor saying, "the stages loss is New York's gain." a reference to 'SCAN', . 'The stage lost a fine actor, even as science lost an acute reasoner, when he ...'

The plot was fun, but it seemed, in this episode, that the plot was not the main focus of show, but more the individuals and stories related to them. Which I think made for a good show.

I loved the truck driver Holmes and Watson used.

We did, once again lack hookers. (What is up with that!)

Watson as a new consulting detective was played down a little and made for better interaction. Although she did help and was present in most of the story, she was better served in the roll she had in this episode.

I had fun watching the episode and I think it held up well, and for that reason I give it,