'Playing the Game' - What have I gotten myself into? 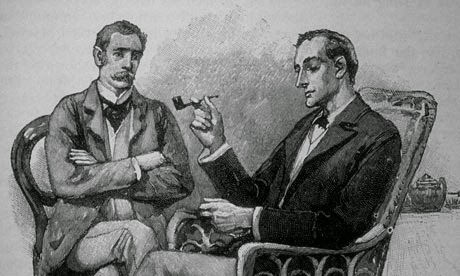 In my last post where I reviewed the G2B4 weekend I seemed to have put my foot in it with at least a couple of people.
And now I hope I can defend myself somewhat.

And I now seem in need of explaining myself. And, after all, that is what this blog is all about.

I had made that comment in regard to my review of Kristina Manente's talk about fandom for the wonderful 'Sherlock'.

And I still stand by my comment, and think as the most popular fan sites would suggest, it is not hard to get the impression.

First I guess I should explain what 'Playing the Game' means to me.
In it's most broad sense, for me 'Playing the Game' is two fold.
First would be examining the stories as written by Doyle and trying to find clues related to real world experiences. This, to some, would be the  most pure form of 'Playing the Game', researching Doyle's work and coming up with the why's and where-fores of Doyle's material, taken it so far as to even examine Doyle's life.
This could even take the form of researching the history of things and objects in the Canon. This approach, history of items and things, I do a lot in my presentations.
I recognize the study of Doyle and his other works as being a very scholarly approach, and one that I am not all that suited for.

The second part for me would probably be the most common, and that is, taking the stories as if Dr. John Watson actually wrote them and that they are true, at least for the time in which you participate in the hobby. I participate in this one a lot at the various groups I attend.

And to me, or at least for me, a Sherlockian is someone who pursues Holmes in some manner close to this.

And then we have the problem of 'Sherlock'.
To even have 'Sherlock' in a Sherlockain conversation to some is totally ludicrous in the first place because it is not a work written by Doyle. And you have to give them that.

But we have 'Sherlock' and it is a wonderful show and since it is so popular it is hard not to get caught up with it and 'Play the Game'.

And it is here that my earlier comments are aimed.

For me, 'Playing the Game' with the show is looking for Canonical references and contemplating the characters as portrayed on the show, Canonically.
Just as an example; One point of discussion I would have, 'Playing the Game', would be; Would the Canonical Holmes show up at an appointment with the Queen is just a bed sheet.? (You can come up with your own answer for that one.)
Can you take your version of the Canonical Holmes and make him fit into the Holmes portrayed in 'Sherlock'? Is he still being Sherlock Holmes?
For me, I think the show is spot on in some areas and way off the mark in others.
This is 'Playing the Game' as a Sherlockian, in my view, if you are willing to let yourself leave the Canon in the first place. One of those lines we draw to make it fit into our way of thinking.

It seems to me, on the most popular 'Fan' sites I have seen, 'Playing the Game' with 'Sherlock' does not require the original stories to be present. Some fans have even stated that they have not read the Canon at all or at least not all of them.
'Playing the Game' with 'Sherlock' seems more about trying to figure out where the story is going to go nest and whether or not Holmes and Watson are or should be lovers. Is Moriarty going to come back? Or will Sherlock once again have a relationship with someone.

Don't get me wrong, if that is how you enjoy the show, Great! But is it 'Playing the Game' as a Sherlockian or are you 'Playing at the Game' with 'Sherlock'. They aren't the same, and often times I think this is where the confusion lays.

I realize that choosing to view 'Playing the Game' this way is based on personal bias and comfort zones. I am okay with that.

My real point is I still believe there is a blurred line between both camps that is often still misinterpreted and doesn't play well for some folks.

Like I have said before, I think 'Sherlock' is the best thing to happen to Holmes in a very long time and as really opened up the world of Holmes and Watson to many more folks. And you can be both, a Fan and a Sherlockian.

This is only my opinion, and I respect yours. After all, I am also someone who 'Plays the Game' with 'Elementary'.
Posted by JohnF at 2:12 PM