FIVE - a mini HOUN? A review of The Five Orange Pips for discussion. 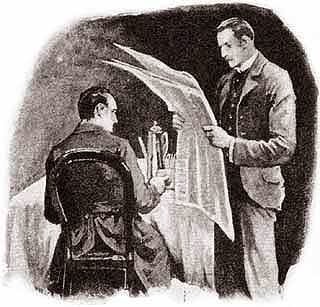 If I could imagine for myself an evening sitting by a fire enjoying a book it would be just about as Watson describes it in the beginning of this tale.

"Sherlock sat moodily at one side of the fireplace cross-indexing his records of crime, while I at the other was deep in one of Clark Russell’s fine sea- stories until the howl of the gale from without seemed to blend with the text, and the splash of the rain to lengthen out into the long swash of the sea waves. "


What bibliophile amongst us does in at some time envision being able to just sit by gas lamp somewhere and enjoy a favorite beverage, a book and a fireplace. And to have Mother Nature giving sound effects while you read, WOW!
We sit and read in so many uncomfortable and uninviting places, and if we are lucky, sometimes we get to sit and read in ideal conditions.

And also learn a little bit about Watson's reading tastes when he has some free time, Clark Russell.

A nod to Watson or Doyle's love of travel and adventure perhaps. Or was this reading material a statement on Watson's concern for the common man?

We learn of at least six unwritten cases that we will never hear about.

Watson is still married but on his own again.

We learn of how many time Holmes considers that he was beaten and by whom (I am sure the number increase by one after this case.)


There are also some similarities to the HOUN.

Both involve men who came by unexpected inheritance.
Both involve events from someones past and carry over into other generations.
Both have outcomes that are not clearly established and are left in vague conclusion.
Both have the 'client' placed in danger, one with a said outcome.
Both have men who for a period of time are in mortal fear for their lives.

Did Holmes learn from this case the importance of needing to send Watson to keep an eye on Sir Henry. It would seem Sir Henry would have been a little more capable of taking care of himself then Mr. Openshaw would have been. Holmes in some way must of felt responsible for Openshaw's death.

We also once again see the fascination with American history by the literary agent and how he was up  on current affairs.

The story is a little (very) disappointing for it's swift conclusion with no clear ending.