If you are headed west,

JACKSON — Walk in the door of Hein & Company Used and Rare Books, past the giant literary sculpture — a twister built from hundreds of hardcovers — and all the cozy little reading spots, and head up the stairs to a scene straight out of an Arthur Conan Doyle novel. It’s like a time-machine jump into Victorian London, complete with Sherlock Holmes’ sitting room, Dr. Watson’s Apothecary, Mrs. Hudson’s Tea Shop and more.

So. Much. More.
What began as fun little idea dreamed up by two uber-Sherlock fans, bookstore co-owner Linda Hein and best friend Beth Barnard, has turned into a Sherlockian marvel, a Baker Street West that includes a pub, secret passageways, revolving bookcases and a Victorian parlor for special events. You can indulge your inner detective at the All Things Sherlockian shop, dabble in steampunk apparel at Adler’s Emporium and channel your inner child at Wiggins’ Toy Shoppe. There’s even a bee-themed shop, South Downs Apiary, in its final building phase, with hexagonal shelves bearing honey, beeswax candles and copies of “The Beekeeper’s Apprentice,” the book that launched Laurie R. King’s Holmes-inspired series.
That’s not all. There are murder dinners and afternoon tea mysteries; a Sherlockian literary society, Holmes’ Hounds; and a theatrical company, the Baker Street Players, which is up for three SARTA awards from the Sacramento Area Regional Theatre Alliance for last spring’s production of “Sherlock Holmes and the Case of the American Twins,” by Chelsea Quinn Yarbro.
And it’s all run by this Sherlockian trio: the Heins — Linda and her husband Wolfgang, and Barnard, who serves as artistic director.
Naturally, we had questions — elementary ones, of course — and Linda was happy to play Sherlock to our befuddled Watson. 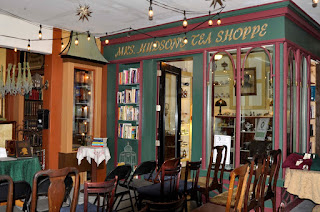 Q How on Earth did this start?
A Four years ago, my girlfriend and I would meet in different restaurants for lunch, and talk about different Sherlock Holmes stories. I asked my husband if we could have a little part of the bookstore to make a tiny 221 Baker Street. But as soon as he started building that room, our imaginations went wild. We put in a tea shop, and I said, “You can have a pub.” We have eight shops all dedicated to a subject or a character — the only shop that doesn’t directly relate is the pub, but every Victorian London should have a pub. We expect they’ll all be finished by the weekend after Thanksgiving.
Q What came first, Baker Street West or the Holmes Hounds?
A We officially opened 221 Baker Street in November 2013 — still a work in progress — but it wasn’t until January that we started Holmes Hounds, thinking if we had 10 or 12 people like us, who want to talk about Sherlock Holmes stories, it will be wonderful. The room was twice as big as we’d planned, but we outgrew the room! We have 90 members.
Q Tell us about the plays …
A When we opened Baker Street, we christened it with four performances of “Houdini and the Last Seance,” and one of our members invited a well-known author, Chelsea Quinn Yarbro, who has written books about Mycroft Holmes and (numerous) novels. She was inspired to write “The Case of the American Twins.” So Wolf and I put together a production company, the Baker Street Players. We had eight performances, and they were all sold out. We’re planning at least three or four (plays) per year.
Q We didn’t see a conventional theater setup. How do you stage these?
A You know theater-in-the-round? It’s the reverse: The audience is in the center; the actors are around. We have eight secret passageways. During the play, we have five of them in use. Actors come out of one storefront and exit in another storefront, and come out in a different one, very mysteriously. It’s probably more fun than we deserve!
BAKER STREET WEST
Find Baker Street West on the second floor of Hein & Company Used and Rare Books, open daily at 204 Main St., Jackson. You can wander through the Baker Street scenes and shops at any time, but the best way to experience this creative marvel is at an event, such as a mystery theater dinner — the next two are scheduled for Oct. 22 and 29 — or a play.
The Baker Street Players’ next production will be “The Final Toast” by Edgar award-winning author Stuart Kaminsky, which will open the last weekend in January and run through early March. Chelsea Quinn Yarbro, who wrote “Sherlock Holmes and the Case of the American Twins,” is working on a sequel, tentatively scheduled for spring.
Learn more and add yourself to the mailing list at www.bakerstreetwest.com.

And for some more on this place: Victorian Scribbles
Posted by JohnF at 6:14 AM

Email ThisBlogThis!Share to TwitterShare to FacebookShare to Pinterest
Labels: Books, Fun Stuff, Other Blogs, others essay, others reviews