We regret to inform you that The British Academy of Film and Television Arts will not be honouring Jeremy Brett with a posthumous Award.  Our petition, dossier and letter were discussed at the Academy’s Television Committee meeting which took place at the end of January.  However, despite all of our support from several leading actors, producers and directors, the Board of Trustees decided that their initial decisions on posthumous Awards would not change.

Ms. Kelly Smith, Head of Television and Video Games within BAFTA relayed the information to us, saying:
To confirm BAFTA Awards are given for excellence in particular categories at our awards ceremonies for their work in the Awards year.  These awards may still be presented to someone who died between the completion of their award-winning performance and the date of the ceremony itself.  In keeping with this policy, Heath Ledger for example won a BAFTA Award for Best Supporting Actor for his performance as the Joker in The Dark Knight, even though he died before the date of presentation.
The Academy also honours individuals with either Special Awards or Fellowships, which recognise outstanding contribution to the film, television or video games industries for overall bodies of work.  However, our Board of Trustees decided a number of years ago that these honours should not bestowed posthumously. 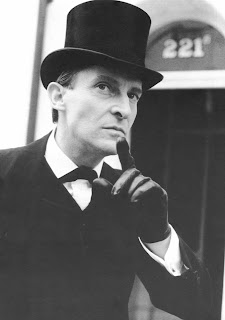 So… we couldn’t get BAFTA to recognise Jeremy’s talent and work.  But we are however proud to have made a try for it.  We are also very proud and thankful for all of the support which we received, be it from actors, television executives, producers or directors.
Most of all, we would like to say a big big THANK YOU to all of Jeremy’s fans and admirers who joined us on our venture.  Thanks to you and to your belief in what we were trying to do, Jeremy Brett and his work received a big bag of publicity all over the world.  We shall forver be grateful for that.
To our critics, and especially to those who thought our campaign “unrealistic”, we would like to point out that from the start, our contact at BAFTA, as well as past and present members of the Academy thought that we may indeed be able to achieve something.  Had this not been the case, none of our work would have been discussed at any official meetings.  We did not succeed.  But we tried.  We did our very best.  We could have done nothing more.
On a last note, we would like it to be known that we are very grateful for the politeness shown us by Ms. Smith.  It was indeed a pleasure to correspond with her.
For those whom it may interest, we shall continue to update you as to what will become of our team.  Please stay tuned.
Once again, THANK YOU for your support!

Credit where credit is due 2

Credit where credit is due 1