An interesting review of Brett's Holmes. . . 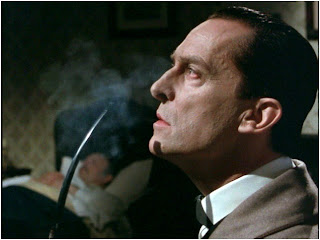 Jeremy Brett (1933-1995) has inherited the mantle of Sherlock Holmes from Basil Rathbone (1893-1967) – indeed, many who have never had the pleasure of seeing Rathbone’s definitive turn as the Great Detective now imagine Brett when mentally picturing Sherlock Holmes.  This is something of a shame.

The standard critical consensus on this is that Brett revitalized Holmes, that his characterization was the closest to Sir Arthur Conan Doyle’s original conception, and that the episodes of Granada’s television series were the most faithful adaptations ever.

Well …. most of these perceptions are not quite true.

The Granda series did not revitalize interest in Sherlock Holmes; rather, the Granada television series is probably the culminating event in what was a decade-long revival of interest.  Throughout the 1970s, interest in Sherlock Holmes was nearly as high as it had been during Sir Arthur Conan Doyle’s lifetime.  Holmes returned to bestseller lists with Nicholas Meyer’s novels The Seven Per-Cent Solution (1974) and The West End Horror (1976); in fact, Seven Per-Cent received a glossy film treatment by Herb Ross in 1976, starring a woefully miscast Nicole Williamson (born 1938) as Holmes and Robert Duval (born 1931) as Watson.  In addition, the Royal Shakespeare Society revived William Gillette’s play Sherlock Holmes, running for many years on Broadway with such actors as John Wood (1930-2011), John Neville (born 1925) and Robert Stephens (1931-1995) in the lead role, and Paul Giovanni’s Crucifer of Blood also opened on Broadway in 1978, starring a sterlingPaxton Whitehead as the Great Detective.

So, when Granada launched its series in 1984, it was really riding the crest of an almost unprecedented decade-long renaissance for the character.

As for the series itself, it is also not exactly true that the series episodes – largely scripted by John Hawkesworth and Jeremy Paul – were particularly close to Conan Doyle’s stories.  To be sure the level of fidelity was higher than Rathbone’s anti-Nazi war-time excursions, but the series all too often tacked on endings found nowhere in Doyle, or added irrelevant digressions to pad running time.  Indeed, the most faithful adaptations of Doyle were committed not to television, but to radio in two excellent series of adoptions starring, alternately, John Gielgud and Ralph Richardson, and,Carleton Hobbs and Norman Shelley, as Holmes and Watson, respectively.

Which takes us, finally, to Brett.  Any dramatized Sherlock Holmes story passes or fails largely on the strength of the actors playing the parts of Holmes and Watson.  Brett was very lucky indeed in his Watsons.  For the first two seasons Watson was portrayed by David Burke (born 1934).  Burke’s Watson was not the boob he is often portrayed to be lesser films, but, rather a competent medico somewhat in awe of the Great Detective’s powers.  There was certainly nothing wrong with Burke’s performance, but it lacked warmth and that touch of complicity with the audience that makes a compelling Watson.  Watson is the stand-in for our selves and, as such, Burke perhaps looked a tad too much like the late Joseph Stalin for his characterization to be totally effective.

Burke was replaced after the second season for the rest of the series by the extremely talented Edward Hardwick (1932-2011).  Hardwick, son of actor Cedric Hardwick, was simply the finest screen Watson we have had: warm, intelligent, steady, comforting and capable.  He was an eminently watchable actor, and his recent passing is a great loss.

Which brings us, finally, to Jeremy Brett’s Sherlock Holmes.   If I seem reluctant to address his performance, it’s because I am.  His turn as Holmes has always left me deeply ambivalent – Brett was a beguiling, amusing and melodramatic presence, but he just wasn’t Sherlock Holmes to me.

In the first two seasons, it seemed as if Brett was determined to be the nastiestHolmes on film.  In The Adventure of the Dancing Men, one of the earliest episodes, Brett’s Holmes is rude and condescending to a client in ways never found in Doyle.  In The Adventure of the Blue Carbuncle he bellows "I am not retained by the police to supply their deficiencies” in a manner more reminiscent of a possessedLinda Blair than Sherlock Holmes.  His boxing scene in The Solitary Cyclist is laughable, and some of his line readings in The Final Problem are simply bizarre.  His laugh is a strangled bark and he is too cool, too aloof, and too … reptilian.

None of these embellishments are particularly surprising when one keeps in mind Brett’s initial thoughts on the character – Jeremy Brett hated Sherlock Holmes.  In an interview with The Armchair Detective prior to the American debut of the series, Brett commented that Holmes was a dreadful man; indeed, he wouldn’t “even cross the street to meet him.”  This is hardly the Holmes of Doyle, who was capable of both great charm and great courtesy, whom Watson wrote of as one with a depth of “loyalty and love” and who had “a great heart as well as a great brain.”

However, after these first two years, something happened offstage that forever altered his performance as Holmes for the rest of the series run.  In 1985, Brett came to the United States to star in a Broadway revival of Frederick Lonsdale’s Aren’t We All?, also starring Claudette Colbert and Rex Harrison.  (Brett and Harrison worked together, of course, in the 1964 film version of My Fair Lady.)  While in the US Brett was on the receiving end of a torrential flood of love and admiration from Sherlock Holmes disciples.  He was applauded, feted and lionized – he was, after nearly 30 years of acting – a star with groupies.

This, I think, more than anything changed his Holmes.  The change is evident in his return to the series immediately after his US tour, and in the first episode (also his first with Edward Hardwick), The Adventure of the Empty House.  This new Holmes is warmer, funnier, and more affectionate.  Indeed, his badinage with Henry Baskerville in the two-part Hound of the Baskervilles is almost … playful.

However, despite all the softening of the character, Brett’s Holmes was still too mannered, too bizarre, and too twitchy to be fully embraceable.  Brett was an actor with melodramatic tendencies too deeply pronounced for him to etch a characterization on a more approachable, human scale.  And his Holmes suffered from his excesses.  In addition, unfortunate illnesses and weight problems so altered Brett’s appearance throughout the remainder of the run that at times he looked like a dissipated Peter Lorre, and sometimes more like Mycroft rather than Sherlock Holmes.  His obesity at times seemed to amplify a somewhat natural effeminacy in his line readings, and the overall result near the end was dire.

Now for the many Brett fans out there who feel as if I have spat on an icon, I just want to underscore that I don’t think Brett was a bad actor.  He delivered many fine performances, for example, in the television versions of The Picture of Dorian Gray(a superb Basil Hallward) and An Ideal Husband (simply the best Lord Goring I have ever seen).  He is certainly fetching in My Fair Lady, and he was always a dependable television villain.  Nor was he a terrible Sherlock Holmes – for that, simply look to Charlton Heston, Christopher Lee, or Nicole Williamson – he simply was a poorly conceived one.

Credit where credit is due.
Posted by JohnF at 12:42 PM