Elementary S4E7&8 - 'Miss Taken' and 'A Burden of Blood' - two reviews for the price of one, and about time. 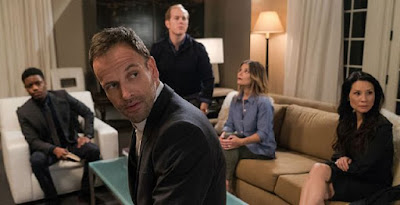 Seasonal activities and the lack of time has kept me from blogging here as much as I would like lately.
Also, coming up with a review for the latest episode of 'Sherlock' (which I have yet to do, but will do soon) has made me want to avoid reviewing anything for a little while.

But last night I had the chance to relax and watch the two latest episodes of 'Elementary'.
Episode 7, 'Miss Taken' was about a murdered former FBI agent who was still investigating a missing persons case (and a couple others which prove to be irrelevant) several months after the missing person was found. What is left of the FBI agent is found in a wood chipper.
The missing person, Mina Davenport had escaped her captor several months earlier and Holmes and Watson need to find out why the retired agent is still investigating.
Side story has Watson, thanks to Gregson, discovering that a book has been written about Holmes and her, thinly disguised as fictional characters. She does however know her step-father wrote the book. She also discovers he will soon publish another.

This to me has been one of the better episodes of the whole run of the show. A big part of that has to do the the spot-on performance of Ally Ioannides as Mina/Cassie.
It turns out that she is not really the missing daughter named Mina but indeed a con-artist named Cassie who looks enough like the missing girl to convince the grieving parents that she is their daughter returned after ten years a captive.

Reviewing a photo of the ten year old Mina and the returned 'Mina' Holmes discovers that the ears of the two girls are not the same and that grown 'Mina' is an impostor. Ioannies is very convincing first as the returned daughter then as the con-artist murderer. Enough so that Millers Holmes has trouble in the end finding out the complete truth. I could see her as a returning character that 'Holmes' has trouble actually finding proof to convict. (Maybe see will come back as the next incarnation of Milverton?) The last exchange between Cassie and Holmes in the cell was really well done I thought.

Millers Holmes in this episode gets the closest I believe to what we will see in this show to a Canonical similar Holmes. His observations and habits are convincing and his treatment of the other characters is not without charm. The observation of the clues and Sherlockian quirks is also convincing. Watson although involved is much lower key in the actual investigation.

I also found the story line of the book being written about Holmes and Watson a good touch.
It was well done writing Watson as the offended one in the case of the books publication, with Joan commenting on how mad Holmes may be since he is such a private person.
It also served as a good commentary on who the Canonical Watson would sometimes 'flower' up the stories to make them more readable and not just a scientific observation.
My only problem with the story line (which may just go to show what I expect from the show) was with; Why and how Cassie found the real missing Mina?

Episode 8, 'The Burden of Blood' was also a very strong story. A young women is found murdered and is also found to be pregnant. First it is believed that her husband murdered her once he found out she was having an affair since he was unable to have children and the child could not be his.
Then we are led to believe that it may be her lover once he found out she was pregnant and that would cause him problems with his marriage.
We soon find out the murder victim is the daughter of a serial killer who is serving life in prison for his crimes.
Listening over and over again to the victims last phone call, Holmes soon learns who the actual criminal is.
Side story in this episode is Det. Bell's studying for his sergeants examine, which Holmes does not believe he really wants to do.
Again, in this episode, we see a Holmes played as Canonically close as we are likely to see, played by Miller.
The annoying quirks of the first few years have mostly, at least for the time being, disappeared (okay, except when it comes to Watson's love life or not) and 'Holmes' is a more focused individual. The story line twist and ending were well done and made for a good story, especially since we didn't want the victims brother to be the guilty party.
Canonically we see Holmes allowing Lestrade to take credit for solving cases, with Lestrade usually not making the connections of clues Holmes gives him. Here we saw Holmes, and Watson, helping Bell in such away that Bell solves a case and recognizes his own skills.
We find a Holmes more welling to accept friendships in these new episodes.

I enjoyed both of these episodes and watching them helped me figure out why I was having so much trouble coming up with a review of the newest 'Sherlock'.
So I give both these episodes;