Well, Elementary-wise, last weeks episode was just a bad dream and I woke up and real Elementary was back last night.
I also noticed this morning that several other blogs I follow have already posted comments about this weeks episode. I have not read them yet, but I am taking that as a good sign. (However, I am not expecting much from one of them.)

This episode opens with a body falling on top of a delivery truck, but not being found till later. Shade of BRUC in this canonical reference.

The murdered women turns out to be the estranged daughter, from a one-night-stand, of a dying billionaire.
She had been asked to come back into his life as a blood donor for the very sick man.

It is first assumed that she is his mistress, which is thought to be the reason for her death. That turns out not to be true, so Holmes and Watson have to find another motive for her death,

I found this to be a very good episode, with it's flaws about the same as usual; not enough deductive work by Holmes, Watson taking on to much of the detective roll, and although less in this episode, the animosity between the Holmes brother.

The strengths were better than the last few episodes.
The case had some very interesting twists and turns, and although the motive was a little disappointing, it did hold up OK.
I thought the clue about the paint chip splatters in the truck was good.
I though the missing tree on the balcony was a good clue.
It was good to see the childish jealousy gone in this episode, and a little hint at a better relationship between the Holmes brothers.
While I was a little disappointed last week that Diogenes was just going to be a restaurant, it seems there may be more to it than that. MI6 cover? Moriarty cover? ( I hope not.)
Holmes the younger still doesn't seem to trust his brothers motives, which the end of the episode would suggest may be a good thing. Something deeper is going on.

I was hoping the boy, in the beginning who liked new words, was going to have something to do with the story, but alas. . . . .

Canonical references I caught were;

- once again, single stick
- BRUC, with the body on the van
- Holmes down on the floor looking for clues
- comments about Mycroft's weight, indicting that he was once heavier
- using many contacts from past cases as help
- avoiding food when on a case
- his love of London (we often heard that London was where he was most comfortable
- Diogenes Club
- another possible reference to BRUC in that the criminal is taking care of the one suffering from the crime

(Come on buddy2blogger and James, help me out here.)

And in cases you don't believe in Moose Cheese.

I enjoyed seeing Margaret Colin in the show. If you remember, she once played Watson in 1987's The Return of Sherlock Holmes (she was Jane Watson)

because I though it better than usual

because of the stronger story, less bickering and the Mycroft twist at the end. 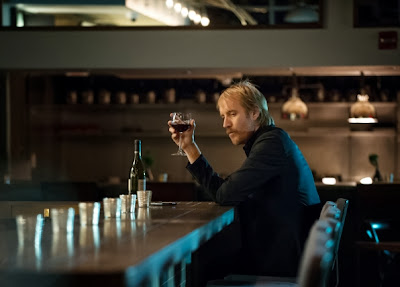