Illustration of Watson and the story behind it.

Several years ago, one of my favorite cartoonist/illustrators was running low on work. He was offering to do sketches of fans favorite characters for ten dollars each. They would be original and unique, signed and sent to you.
I first asked for a Holmes, which he did, and he sent and I thought was terrific.
He did lots of others for other people, and they all turned out great.

When he came low on work again, he put out the same offer.
I asked him to do a Watson. It never arrived. We emailed back and forth several times, he always assuring me the work was done and would soon be sent. At one point he posted the drawing on his site, to prove that he had done it, which I downloaded till the real deal arrived.

It was only ten bucks, and I did get to see the idea he came up with, but I never got the original.

And I did get the Holmes.

Watson by Les McClaine (google his other works, his jonny crossbones is fantastic) 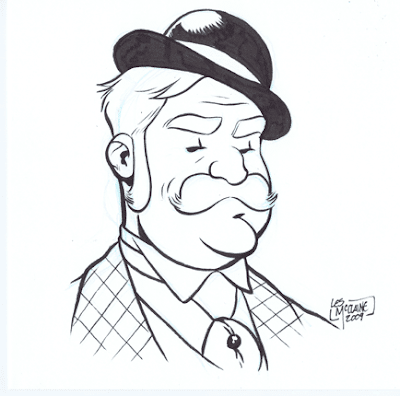