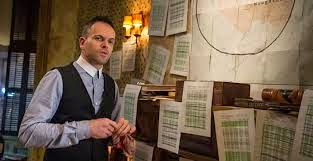 Sherlock is not happy. Matter of fact he is bored. I guess he hasn't been keeping up with all the news lately about how being bored can be a good thing and that boredom can get the creative juices flowing. Experiments have been done recently about taking away teens smart phones and connection for at least part of the day, and most have found the experience stimulating.
Child behaviorists even suggest a little boredom is good for kids. The study of boredom was never listed as one of Holmes' pursuits.

And in Elementary, when Sherlock is bored he doesn't turn to the Canonical crutch but rather the irritating habit of, well, being irritating.

Boredom is one of a couple of Canonical references at the beginning of this episode. Another good one was the reference to old case files. We also get a reference, later in the show to Mrs. Hudson and we also see him getting on the floor while investigating a crime scene.

The case involved a women showing up at the flat looking for her missing husband. It was not unusual for the man and wife not see each other for a few days at a time, but it is unusual that they don't at least talk. At this point I was hoping the story would be an modern adaptation of TWIS, but it did not end up going that way.
The husband turned out to be a recently unemployed lawyer, who had started earning money buying other people's debts at a low price and then collecting on the debts. At some point during his new career he had a change of heart and started to forgive the debts upsetting an important lawyer (from his old firm) who had hoped to gain from a property purchase of someone who could not make good on a debt. This lawyer murdered the husband.

Once again, the case was nothing new. It did however have a few good twists, and made for an interesting watch.
Joan, thankfully, at least for another episode, has taken a little bit of an investigative backseat to Holmes' deductions and insight.

The episode was mainly about boredom. Holmes' bored with no interesting cases, which shows itself in the form of turtle painting, single stick practice, multiple sex partners and harassing Joan again about her love life.

It was also a bit about Joan's boredom with the relationship she finds herself in and the fact that Holmes suggest Joan is not really interested in a long term relationship.

Unusually, the episode didn't dive into the oft used crutch of using Holmes' old drug habit. Instead we find Holmes doing all sorts of other things to deal with the lack of a good criminal case, and we as the audience are finally saved by the missing husband from the banality of some of the bad habits the show falls into.

Canonically we can examine Holmes' methods for dealing with his boredom; cocaine, music, bee's, etc. And which of these seemed to serve the purpose the best. Was this boredom something that followed him through out his career or did the great hiatus put that more into prospective. We find Holmes accepting the solitary life as he retired to Sussex. Was the an acceptance or a desire?

Probably the most interesting thing about this episode was the tease it gave for next week and the probability of Watson moving back in with Holmes.
Canonically we can examine to whose benefit it was, latter in their relationship, for the agreement to once again share 'digs'. Did Holmes suggest Watson move back after the death of any number of his wives? Was it a situation Holmes preferred over living alone? Did the Canonical Holmes suffer as much from the absence of a 'flat' mate.

The episode in no way came up to the level of the last few weeks. It did however control itself when it seemed to be heading into a ditch returning to some of the shows bad habits.

So this week I give it a solid;