SHIN or should it be BCIN -The War Magician 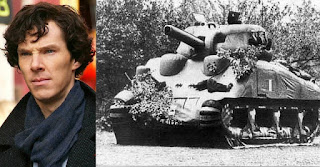 Actor Benedict Cumberbatch has been made famous by his role in Sherlock, the BBC’s modern-day dramatization of Sherlock Holmes. He’s now starring in a new World War Two movie drama called The War Magician.
Cumberbatch is expected to take the lead role and star as a stage magician who, during the war, helped to make things vanish in support of the Allied war effort. The first time the idea for the drama came about was back in 2003. Tom Cruise and producer Paul Wagner got rights to the book by David Fisher and had backed Peter Weir to direct the film.
Plans and progress stalled over many years, but in 2012 the producers engaged a different director, Marc Foster, to direct the movie. Unfortunately, he dropped out, and a new director has not yet been connected to the project.

See the rest of the story here.
Posted by JohnF at 8:05 AM