. . . with all the talk lately about this show or that show not being Canonical enough or that "Elementary" is so bad that it shouldn't even be on the air (much less use the names Holmes and Watson), that "How Sherlock Holmes Changed the World" (HSHCW) is not getting much chatter.

Or even with "Sherlock"  being lauded as the greatest thing in Fandom ever, HSHCW is still not being talked about. Especially sense it also focuses on how well "Sherlock" captures Holmes' methods.

I mean, come on, it is totally Canonical and all about Doyle's creation and not abominations done by other writers. It shows how relevant and timely the writings were. And dare I say, perhaps a little ahead of their time.

Do all other Sherlockians other than myeslf know all the stuff  HSHCW talks about?

I don't think you could ask for a more complimentary show concerning Doyle's works. It is totally about how good the books and Holmes were. And I came away understanding his methods a little bit more.

And the timing is perfect. Right before "Sherlock" season three is to air. 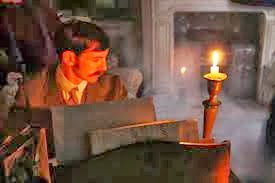 I have watched all but about the last half hour or so now, and hope to finish it tonight.

There are a few times it gets just a hair long winded, but not very often.
Sure we could argue over whether or not they picked a good actor as representation of Holmes, but that is rather subjective anyway. (Although I do love some of the facial expressions of Lestrade).

Will it get lots of people more interested in Holmes? I don't know. Although I think it will get a few.
But it will get them for all the right reasons, Holmes and his methods. Not how sexy he is or isn't.

So with all that said, I hope you check it out and I give it easily