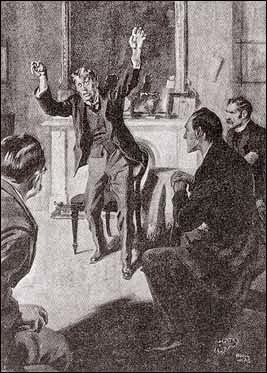 What a terribly hot August it must have been at the time of RETI.
We find Holmes and Watson together in Baker St.
Holmes is melancholy and philosophical.
Watson doesn't appear to be in a much better frame of mind.
Within the first few lines we hear the words pathetic and futile.
Holmes is comparing life to shadows and misery.

We then find him thinking his occupation is not much more than that of a quack that a doctor my send a patient to that he can no longer help.

And it doesn't get much better after that either.

Holmes has no patience for Watson's poetic descriptions of the Haven.

But Watson braves on.


We find Watson has just about as much regard for the appearance of Mr. Amberley as he has for the man's house. Other than a reference to the man's possible strength, Watson has nothing kindly to say for either.

And Watson didn't seem to have learned much from his experience in HOUN as he is yet again being sent on a mission Holmes doesn't really think he is up to. Not only is he sent on a mission to find clues that Holmes doesn't really expect him to find, he is also sent on a fools errand just to keep an eye on Amberley without knowing the truth.
Although Holmes does flower Watson with a compliment about his abilities with the ladies, even that come off as a little flippant.

And although Holmes thinks he would have risen to the front had he taken the path of criminal, he is caught in the act by one of his rivals.

Yes, it must have been a hot miserable August in London.

What is unfortunate about this case is the fact that the crime committed is probably one of the most grotesque in the Canon, yet we never really hear of Josiah Amberley ever being compared to Milverton or Moran or some of the others.
Everything about the man, as Watson describes him seems that he should find a place next to some of these great Canonical criminals.
This woman who married him must have found some redeeming quality in him in the beginning. Either that or she was a gold digger from the very beginning. And who's to say the wife and the good doctor hadn't planned this all along.

It would also seem the good dying doctor only had time to write a couple of words before he died. But he also had time to put the pencil away, right?
Holmes tells the good inspector to look for the pencil should he find the body.
So if Amberley found the pencil and concealed it once again on the body, way would he have not looked, like Holmes, for some writing?

Was Amberley really this evil soul this hot August has us believing. Or was he tortured by this one senseless act that he committed?

Can we really believe two gentlemen who seemed to be in such a bad mood anyway.

I write this in August as the temperature heads near 100 degrees.
Posted by JohnF at 2:17 PM