Sherlock Holmes and the Case of the Canon-era Adaptation 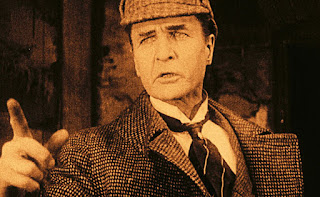 NO MATTER HOW MANY ADAPTATIONS HAVE COME AND GONE SINCE, WILLIAM GILLETTE’S INTERPRETATION OF SHERLOCK HOLMES PROVIDES THE INSPIRATION, GOOD OR BAD, FOR THOSE THAT FOLLOW.

Sherlock Holmes fandom continues to embrace Victorian/Edwardian-era adaptations, even in light of such popular modernized versions as television seriesSherlock and Elementary. The plethora of recent Victorian Sherlock Holmeses includes Ian McKellen as the aging Mr. Holmes, Benedict Cumberbatch as an earlier incarnation of his modernized sleuth in Sherlock: The Abominable Bride, and the still-popular Robert Downey, Jr. action hero model in the Sherlock Holmesfilm franchise. Despite these actors’ brilliant, if widely varied, interpretations of Holmes, as well as the fantastic achievements in cinematic technologies in the past century, the recent attempts to capture canon-era Holmes on film cannot compare to the first actor to personify Holmes, William Gillette, and the recently restored first full-length feature about the Great Detective, Sherlock Holmes (1916). . . . . . . .

Email ThisBlogThis!Share to TwitterShare to FacebookShare to Pinterest
Labels: discussion, In The News, Movies, Other Blogs, others essay, SHIN