Sherlock Holmes doesn't camp!
Watson camps. Or at least he had to while in service to Queen and Country. Because he was wounded so near the front, his quarters must have been as mobile as the rest of the ranks.
But even given that, most of us think of Watson (after he mended a little) as robust and enjoying outdoor pursuits. So we could see him camping, right?
Camping had, like recreational boating, become somewhat in vogue during Victoria's reign.

But Sherlock Holmes camping?
Well that image doesn't actually spring into one’s mind does it?
Sure, he could 'rough it' on the mean streets of London and in opium dens and such places most 'campers' wouldn't think of going. Give me bears and bugs over thugs any day. But out in the wild, communing with nature, nope, not Holmes.

Camping, for the most part, was quite different from what we experience today. Gear was heavy and awkward, not like our modern gear with light-weight materials and vacuumed packed food. It usually had to be done with some sort of ready transportation nearby (very nearby).
And let’s face it, the Victorian’s were not known for traveling light.

While extreme in its depiction, this example sort of shows how Victorians equipped themselves for camping and trips; Who but an Englishman, the legendary Sir John Franklin, could have managed to die of starvation and scurvy along with all 129 of his men in a region of the Canadian Arctic whose game had supported an Eskimo colony for centuries? When the corpses of some of Franklin’s officers and crew were later discovered, miles from their ships, the men were found to have left behind their guns but to have lugged such essentials as monogrammed silver cutlery, a backgammon board, a cigar case, a clothes brush, a tin of button polish, and a copy of The Vicar of Wakefield. These men may have been incompetent bunglers, but, by God, they were gentlemen.
Who of use haven't seen some movie or read some book showing how much gear was carried on trips in this era.

While not all Victorian camping trips were as extreme as this example, most would hardly ventured out with only what they could carry on their backs. These, after all, were not Mountain men of the American West, or pioneers setting out across the open plains, but civilized folk. Certain comforts were required after all. With rare exception, light weight camping did not become possible until the advent of nylons and plastics. Up until the late 1960’s modern camper’s tents were still made out of heavy canvas.

Thomas Hiram Holding is often considered the father of modern camping, gaining his love of adventure from crossing the American plains in a covered wagon.

But Holmes, he was a man of the city. London was his comfort zone. He thrived in London. He required London.
But camp he did, at least once.
In Dartmoor, in Devon. In ‘Hound’.
At least for a few days (a while it seems), and he seemed to do it rather well with a certain amount of comfort.
I am sure he wasn’t thinking of it as camping. More of a ‘stake-out’ I’m sure. But camping it certainly was.
And it seems that little has been discussed about this in Sherlockian writings.
We of course discover this side of Holmes because of Watson’s tenacity and need to prove to Holmes that he was up to the task assigned him.
As we know in ‘Hound’, Watson sets out to find who is hiding on the Moor within view of  Mr. Frankland’s telescope. 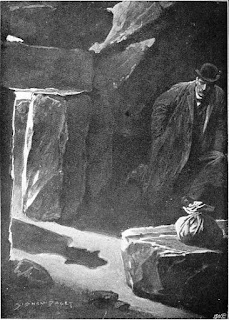 Watson soon comes across the ‘campsite’ set amongst the stone circle, and describes it this way;
“This was certainly where the man lived. Some blankets rolled in a waterproof lay upon that very stone slab upon which Neolithic man had once slumbered. The ashes of a fire were heaped in a rude grate. Beside it lay some cooking utensils and a bucket half-full of water. A litter of empty tins showed that the place had been occupied for some time, and I saw, as my eyes became accustomed to the checkered light, a pannikin and a half-full bottle of spirits standing in the corner. In the middle of the hut a flat stone served the purpose of a table, and upon this stood a small cloth bundle -- the same, no doubt, which I had seen through the telescope upon the shoulder of the boy. It contained a loaf of bread, a tinned tongue, and two tins of preserved peaches.”
Sounds like a camping site to me; blankets and a waterproof, ashes of a fire, cooking utensils, water.
And it sounds like the camp site of either a very fastidious person, or someone with some camping knowledge.
The blankets were rolled up in a waterproof to protect them from the elements. The fire was out.
Had the empty tins been burned in the fire to get rid of the food smells? Were the utensils cleaned to once again get rid of the food smells? Probably left out to air dry. Was the bucket of water covered and protected? Watson doesn’t cover these points, so it would only be speculation on our part to assume any of that.
But camping it does sound like. A form of Victorian light weight camping.

It is shortly after Watson describes this scene we learn that it is Holmes who has been the ‘camper’ at this site. He has been hiding out in his pursuit of information regarding the goings on at Baskerville Hall.
And nothing more is said of this camping trip after that.

Let’s look at some of the other things Holmes had with him at his ‘camp-site’.

It is suggested that this part of the story took place around the middle of October. The nights could probably have gotten a little chilly by then, and probably a little damp.
We know he had blankets. And that he wore a nice tweed suit. Between those and a fire he would probably been warm enough inside, out of the wind.
His utensil requirements, by the food present, would have been very minimum and would have probably been used for eating also; a fork, knife and a spoon.
Watson does not tell us what is in the discarded tins; we do however know that there is at least tinned tongue and tinned preserved peaches. Neither would require more than a knife, fork or spoon. The same could probably be said for whatever foods may have been in the discarded tins. 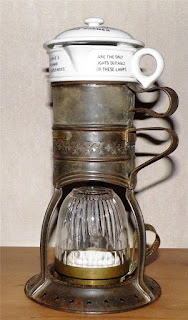 It can be noted that there is no mention of plates or pots and pans. Present however is a ‘pannikin’ and a half-bottle of spirits. A pannikin is described as; Exactly what is a Pannikin? Almost every reference defines Pannikin as: a noun \pa-ni-kən\ pan + -nikin (as in cannikin) "a small pan or cup (usually made of tin). It is a British term dating back to 1823.
A Victorian equivalent of a mess-kit? Perhaps.
This image shows a Victorian food warmer. The very top portion is considered the pannikin. Made of ceramic and has a lid.
Here is another description of the device; The food warmer was commonly used to prepare a warm mixture of flour or bread in diluted milk. This was called pap and was fed to babies and invalids. The mixture would be put in the ceramic container called a pannikin. The pannikin sat inside a container of hot water known as the liner. Both the pannikin and liner sat on a pedestal. A night light at the base heated the water and food, much like a modern steamer. 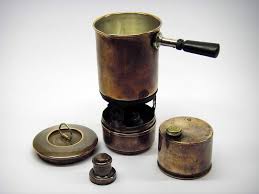 This seems a little elaborate and more than Holmes may require. I would suggest something a little easier was used that is sometimes also called a pannikin. Whatever Holmes used would probably have been something that he could have cooked in and eaten out of at the same time. And if it is only the top of the above elaborate set-up that is called the 'pannikin',  why couldn't any pot used on a stove for cooking and eating, with a lid, be called a pannikin?
Something simpler like this photo would seem more likely. He could have heated up his food from the tins with it, and he could have used it for a warm drink. The one above right could probably all be stored inside the large pot. 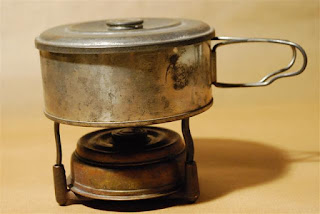 Or this, an alcohol stove.

Modern versions show a lidded pot like this one as pannikins. 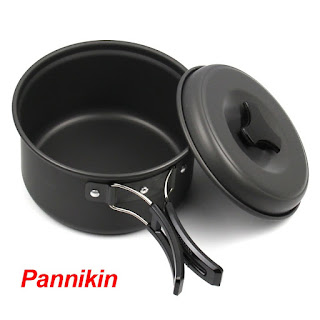 However, the more elaborate set up could heat water separate from his food dish.
I am, however, still leaning more towards the simpler arrangement.

Watson mentions a grate in the hut. That could be taken as a ring of stone, something to contain the fire or it could be a grill above the fire for cooking on. He could have then just placed the tins on top of a grate/grill for warming food. But I don't think so. 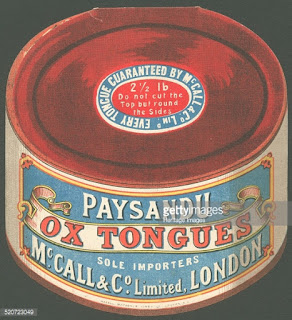 Having no desire to know how to cook tongue, I am not going to suggest a method here.

Watson states that the ashes from the fire were heaped in a grate, so I would suggest a circle to contain the fire is what he meant.
Either way, Holmes would have had to cook his food some way.

Watson does however state that in the corner with the pannikin was half a bottle of spirits.
Now, that could either be a half bottle of Jameson’s spirits (whiskey) or half a bottle of spirits used for a stove. A food warmer as mentioned above would require spirits as fuel.
I am however still of the mind that this set up would be a little more than Holmes would need and suggest that some other sort of spirit stove was used. 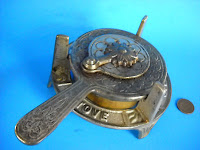 And here is an example of one.

However, when playing the game and Watson actually describes something as such we should take him at his word. And since a Victorian pannikin could be used for cooking and light, up to ten hours, perhaps we should just leave it at that.
My only other argument against the complete pannikin setup would be that Holmes probably had some sort of bulls-eye lantern with him and would not need two sources of light for his adventure. Just a thought.
One thing, actually two, that is not mentioned his the presense of tea or coffee. Now I know, I could not go camping without my tea. I do love the smell of coffee when camping but do not drink it. Tea is however required.

Where did Holmes come up with this 'camping' gear? Was it Watsons? Watson didn't say so.
Was it his? Was it arranged for?

We know that Holmes looked a little thinner, and worn, but bronzed and cat-like clean.
Watson also describes him as looking like any other tourist on the moor.
Exercise and the environment would contribute to the healthy way Holmes looked. A look that could be attributed to, well, camping.


And he was a prepared camper. From what Watson describes as his gear in the hut, he had just about everything he needed. Off handedly Holmes states his only other needs were a loaf of bread and a clean collar. And young Cartwright took care of those.
So it does seem Holmes was a camper. "Needs most" perhaps, but none the less. 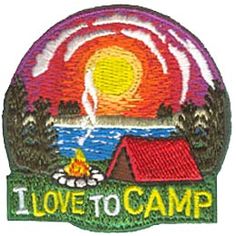 He stayed dry, he stayed warm. He met his food requirments.
Signs of a good camper.

A couple other questions remain. Not about Holmes’ ability as a camper (merit badge material is he) but about his security while camping and that of Cartwright with Seldon running around?

And on that note I will leave you with just one more thought; 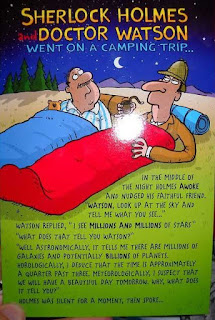 Some more pannikins and camping stuff. 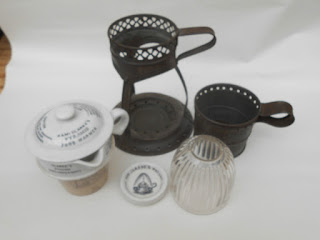 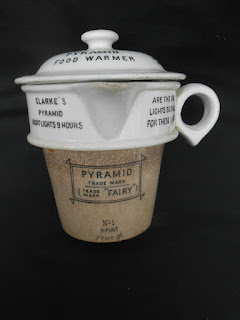 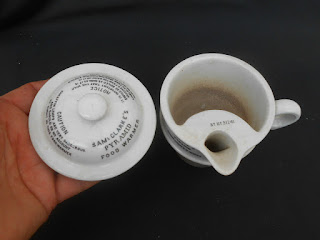 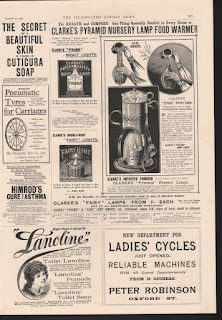 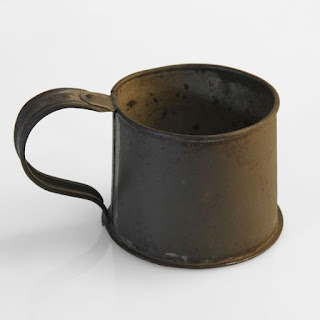 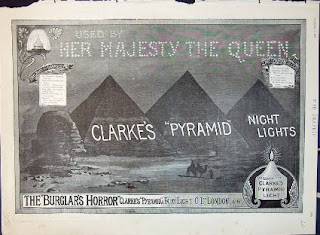 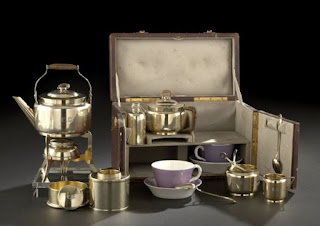 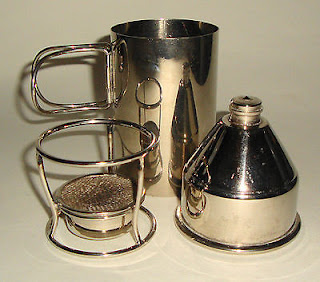 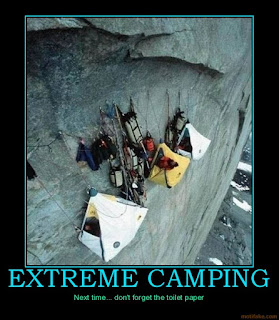