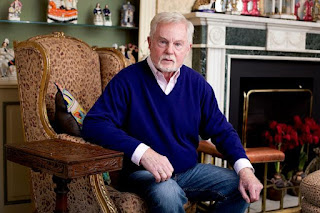 Hot on the bloody heels of their Dracula adaptation starring horror icon Tony Todd as The Count, Canadian audio drama collective Bleak December have just announced that British stage and screen legend Sir Derek Jacobi (I, Claudius, Gladiator, The King’s Speech) will be donning the familiar deerstalker and pipe in a new audio adaptation of The Hound of the Baskervilles.
Sherlock Holmes: The Hellhound is a darker retelling of Sir Arthur Conan Doyle’s terrifying thriller involving a family curse and a horrifying legend. The full-cast and lushly-scored audio drama will be released initially through Fangoria magazine’s “Musick” label later this year. Like Dracula, this Sherlock Holmes adventure will be executive produced by filmmaker and Bleak December founder Anthony D.P. Mann; Mann will also appear as Holmes’ faithful sidekick Dr. Watson.
Mann is “…simply over the moon to have Sir Derek play Sherlock Holmes for us. He is one of those golden actors that other thespians (including myself) look up to and aspire to achieve that level of rare ability as an artist. I’ve been a fan of his for many years, and can’t wait to hear him as Holmes.”
Bleak December’s audio productions celebrate the rich history of radio theater and the spoken word format. Future audio releases planned include full-cast adaptations of Frankenstein, The Phantom of the Opera and Dr. Jekyll and Mr. Hyde. Sherlock Holmes: The Hellhound will be available for download through Fangoria Musick in late 2016. Dracula will be available as of September 30th – just in time for Halloween.
Source
Posted by JohnF at 10:25 AM

Email ThisBlogThis!Share to TwitterShare to FacebookShare to Pinterest
Labels: Fun Stuff, In The News, radio