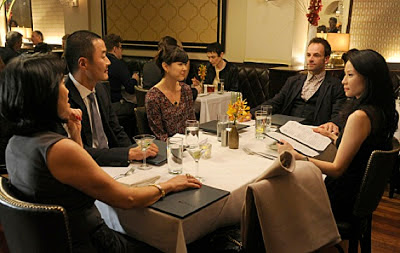 So far this has been one of my favorite episodes.
Sure, things can still be changed and made better and be a little more Canonical, but I still liked it.

As has been mentioned on another blog I follow, it was nice to see clients come by 'Baker St' for a change, which all Sherlockians love.
It was a good touch to have the client show up as a recommendation from a previous client or someone who knows Sherlock.  We see that happen a lot in the canon, it lets us know that more cases have happened than the ones we have been able to observe, and maybe it also make us wish we know more about those 'unwritten' cases. This happens a lot in the Canon and has fascinated and frustrated readers for a very long time. (May we yet see a giant rat?)

As buddy2blogger also mentioned, we hear, a few times, one of our favorite quotes from the canon, "Once you have eliminated the obvious. . ..' and it was well bantered back and forth between Holmes and Watson during the show.

Another reference to a Sherlockianism that I thought was kinda cool was the discussion on the side- walk, after retrieving the stolen art work, about not reporting the crimes to the police. There would be nothing to gain from turning in an old man and destroying his reputation with his family. After all Holmes is not “. . .  retained by the police to supply their deficiencies." This happens in BLUE as well as a couple of other places I believe.


I think it is also kinda cool that this happens in an episode aired in Dec., again, Blue Carbuncle month, where, like in BLUE, this benevolence also takes place.
Maybe also a nod to BLUE is the keeping of stolen items till the case is completely resolved, in this case the painting, which has nothing to do with the stolen jewels, but is interesting in itself.
Also to be noted was that this episode about jewel theft aired right before Christmas, Blue Carbuncle month, with no new episodes till after the first of the month. Maybe the writers are paying attention to the Canon, at least to some extent.

This show also started to examine how Watson can be kept with Holmes once the time of his rehabilitation is over. And using Joan's family in that plot line was kinda cool. It gave us a bit of a background on Watson and opened a dialog for continuing the relationship with Holmes.


It would be nice if the addictions started playing less into the plot lines and maybe that will fade a little now that Watson's story can take a different line. When we first meet Watson in the books he is getting over some physical injuries and trying to find away to rebuild his life. In 'Leviathan' and in 'Elementary' the war aspect can not be used, so 'Watson's' injuries are of a more personal nature. Also in the reading, we learn, although frustrated by Holmes behavior many times, that this is a life that Watson comes to love and can't imagine at some point not having known or shared with Holmes.
I think, the conversation in the cab about Joan being unconventional and on some certain level enjoying the bizarre nature of Holmes' work really handled well an explanation of why in the end there would be no Holmes without Watson and no Watson without Holmes. I thought the way that was handled was very clever. In the Canon Watson had no purpose after his time in service and by a chance meeting at the Criterion his life (and ours) changed in a way he never would have expected.
Although meeting in a different way, but still a meeting by medical circumstances, Joan is now finding a new purpose after being adrift for a while after her personal war.

I also think Millers performance around 'Watson's' family was very much Canonical in nature; Holmes being able to put on a persona' when the need arises. It could also show that he is starting to realize the need he has for Watson in his life, and not as an addiction companion.

Four out of five pipes from me on this one.