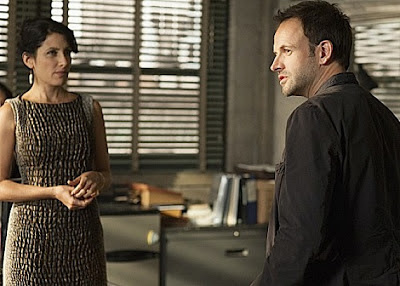 For some reason this episode doesn't seem to have created the chatter, at least on the blogs I visit, that the other episodes so far have.

Although there were still lots of Sherlockian-isms, there did not seem to be any new ones that I caught.
It seemed to play on several we have already spotted throughout the run of the series so far; drug habit, mental lumber room,etc.

One I did catch, and it may have been used before and I just missed it, was the dating of a crime by the newspaper that was used in the bomb wadding. And also the name of the paper used by the type face.
We saw this in the Hound and a few other cases.
What was really fun about this episode was once again 'Watson'. I love the fact the Lucy Liu's Watson seems to be getting bored with 'Sherlocks' immaturity and lack of communication, and this lack of growth on his part seems to be more the reason she is ready to move on than the fact the he is beyond the need of a companion. They both seem to show a need for each other, but don't know how to say it. I think this could make the next several episodes rather fun to watch.

I think the supporting cast was once again excellent.

I also believe the show has reached the point where it is no longer being compared to 'Sherlock' and is being looked at as hoping it will stand on it's own.
For Sherlockians I think we have started to develop an attachment for the players and are hoping it comes up with the needed formula to continue. If they can keep adding more Sherlockian-isms and keep giving us some canonical comparisons I believe it will continue.

I do believe the show needs some big bump in the next couple of episodes to keep people interested.