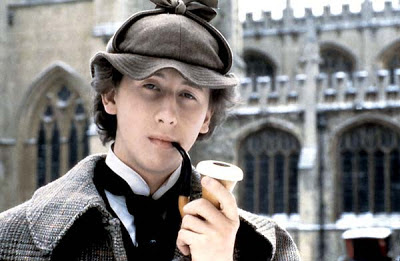 This week I was able to watch, once again, 'Young Sherlock Holmes' thanks to Amazon Prime.

Although a fun film, it was hardly remarkable, only receiving Oscar nods in a technical category.

It's biggest fault is that after a pretty good start, it fell into a 'Raiders of the Lost Ark' like story arc.

The sets were wonderful, CGI groundbreaking and the cast was acceptable.

The writer went on to do great things with Harry Potter, and the director has gone on to do many good movies.
All three lead actors continue to make movies, but have, for the most part, had, well, unremarkable careers.
What I would like to discuss here, and I feel I should discuss something about this movie since my wife was kinda forced to watch it last night, is the portrayal of Holmes by Nicholas Rowe.
Nicholas was 19 at the time the movie came out, having read for the part while still in university.
He had only acted in one movie up till this point.
His build embodied a stature you could imagine Holmes having while young and still in college. He was tall, and had very angular features. He easily had what could be described as a hawk like nose.
He had long dramatic fingers, very violin worthy.
He walked with a certain impatience and he played well an individual that had lots of energy and impatience.
His mannerisms easily pulled off concentration and briskness, and he more than ably delivered his lines.
I think you could have easily pictured him working over test tubes when first introduced to Watson some years later.
As has so often plagued actors who have played Holmes, he was saddled with a weak story and if not bad writing, at least non-canonical.
Alan Cox, the actor chose to play Watson, was expected to play a Watson along the lines of Nigel Bruce's version. And we have all come to know how hard it is for Sherlock to be credible along side that. He was hardly steadfast and reliable.
I think Nicholas Rowe's performance would have been more memorable if he had been given a truer mystery in story and less action adventure, which we had kinda come to expect in the mid-80's.
Next time you have time for a mindless evening, watch it again and see what you think.
Posted by JohnF at 1:41 PM