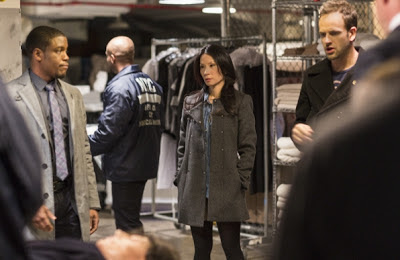 After several weeks of trying to rally the troops in support of this show, 'Dirty Laundry' seems to have taken a swipe at my resolve.

I prepared and watched this episode in hopes of coming up with revelations like the ones I felt I had found in the episode before Christmas.

It very much reminded me of some of the Canonical tales that detractors like to argue that Watson did not write.
I would not fight that argument on this episode.

I could argue, weakly I'm afraid, that this episode was written in such a way as to make it seem that 'Sherlock' handled the case the way he did to allow Watson more involvement as a way of showing her that she wanted to continue working beside and with him.
When I first heard that 'Holmes' was going to offer 'Watson' an apprenticeship to continue to work with him, I though if handled well it could be a good way to handle 'Watson's' remaining. It however was not handled well. And 'Watson' will probably want to leave even more after this one. As will Gregson and Bell.
They need to find a way for Joan to come to this conclusion on her own. And with Holmes acting even more the slob, I feel it will become very hard to find a plausible way to make that happen. (The slob thing I believe is a way of trying to connect to the canonical fact that Holmes' papers and such would be scattered when working on a case. However, missing the point that in personal habits, he was very neat.)

I think 'Holmes' talents were displayed in the least appealing way so far of all the stories.

And I also feel the writers are really hung up on the hooker thing.

I think both actors are still doing great with what they are given, and it is the writers that are letting them down.

I am really reaching to think that this story may reference the Second Stain a little, with the stain being hidden and with it involving international intrigue, but like I said, it is really reaching.

And the fact that 'Holmes' just happened to have the 'magic key' that unlocked the hidden photos was writing facts to help a story you don't know how to get out of. (You can't come up with anything better than invisible ink?? Probably most crime scenes now use UV lights as standard practice.)

but give this episode only ;