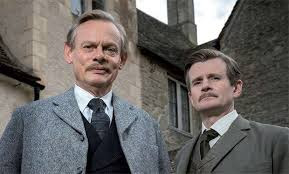 I must admit that I went into expecting to have to change the characters names, at least mentally, from Arthur and Alfred to Holmes and Watson.
I half expected the presentation to be another story about the great detective, just with different names.
I was pleasantly surprised that turned out not to be the case.

I am sure plenty of artistic license was taken with both the story and the individuals portrayed, but, unless you must have your historical dramas completly accurate, it didn't seem to detract from the entertainment value of the show.

Just like Holmes we all have an image of how Doyle should be portrayed. Unlike Holmes, we actually do know what Doyle looked like at the time this part of his life took place.

That however doesn't take away for the excellent job Martin Clunes is doing with the portrayal of Doyle. He is convincing as Doyle during this time period and is fun to watch without making the portrayal seem like an attempt at Holmes.

Although I have no idea what Alfred Wood looked like or how he was, I do feel Charles Edwards is doing well with the character and makes him very likeable

Arsher Ali is probably playing George a little less ethnically than the real Edalji's picture would suggest, but, so far, is doing a good job in the roll.

The sets, as always with a Masterpiece presentation, are excellent, as are the costumes.

A major compliment I can give the production is; If it were not for references within the show of Doyle being the creator of Sherlock Holmes you would forget there was a Sherlockian connection. And I see that as good if you were expecting a non-Sherlockian story. You forget, when allowed, about Holmes, and just sit back and enjoy the story.

Like many such shows, the recording of history and known facts does not allow for stories like this to be complelty accurate, which is a shame. It did however force the judical system of the time to be changed, and that is good.

I am looking forward to the other episodes.
Posted by JohnF at 11:46 AM