Popeye of the Baskervilles. . .

Had the pleasure this last Friday of attending a meeting with the Chester Baskerville Society in Chester Ill.
The meeting was held at the McClure Museum and was very well attended and was conducted by very gracious hosts.
The discussions for the evening were 3GAR and 3GAB with interesting papers on both.

I am not a big fan of 3GAB but found very much of interest in 3GAR.

Once again we must question Holmes logic in allowing Nathan to go on  a wild goose chase while Holmes and Watson set a trap for 'Killer Evans'. Especially when we see the results of such goose chase.

HOUN and a couple of others should have taught him a lesson.

Lots of discussion in 3GAB centers around how Holmes' treated Dixie. I did not find it offensive or out of place when taken in context.

I don't know if I will make all the meetings of the Chester Baskerville Society because it is a rather long drive for me, but I know I will attend whenever I can.

If you remember from an earlier post, it was Mike McClures son who Jeremy Brett became rather fond of while in St Louis. Even called the young boy while a meeting of the CBS was going on. How would you love to have your meeting interrupted by Jeremy Brett. 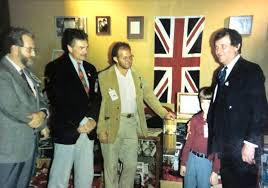