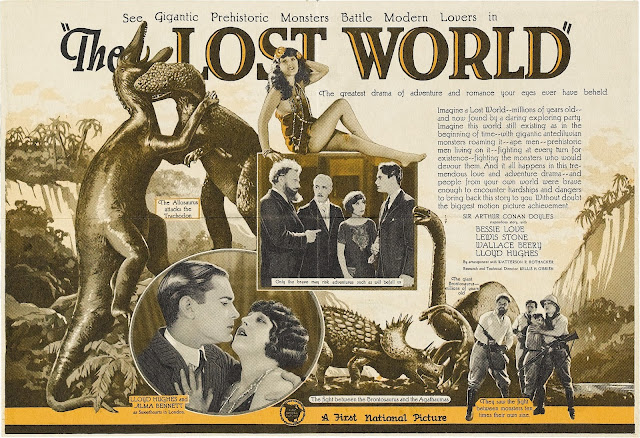 In 1922, Conan Doyle showed O'Brien's test reel to a meeting of the Society of American Magicians, which included Harry Houdini. The astounded audience watched footage of a Triceratops family, an attack by an Allosaurusand some Stegosaurus footage. Doyle refused to discuss the film's origins. On the next day, the New York Times ran a front page article about it, saying "(Conan Doyle's) monsters of the ancient world, or of the new world which he has discovered in the ether, were extraordinarily lifelike. If fakes, they were masterpieces".[5]
In April 1925, on a London-Paris flight by Imperial Airways, The Lost World became the first film to be shown to airline passengers.[6] As film stock of the era was nitrate and highly flammable, this was a risky undertaking on a wood and fabric-hulled plane, a converted WW1 bomber, the Handley-Page O 400.
This is the first dinosaur-oriented film hit, and it led to other dinosaur films, from King Kong to the Jurassic Park trilogy.
Writer Doyle, also the creator of Sherlock Holmes, appears in a frontispiece to the film, absent from some extant prints.

In 1998, the film was deemed "culturally, historically or aesthetically significant" by the Library of Congress and selected for preservation in the United States National Film Registry.