From a few years ago, but a good read.


“You have been in Afghanistan, I perceive,” the middle-aged man said in greeting as the doctor entered the room. The doctor, just returned from the second Anglo-Afghan War, was amazed by the man’s perspicacity. But before he could ask him how he knew this to be true, the man grabbed him by the sleeve and pulled him over to view his latest obsession.
Enlarge This Image 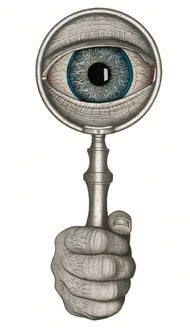 Holmes often seems oblivious to what others are thinking or feeling, even his dear Watson.

While working, Holmes seems inexhaustible, not sleeping for days. Between cases, he sometimes falls into a state of deep lethargy.

Holmes has extensive knowledge of odd subjects — like 140 different types of cigar, pipe and cigarette ash.
Enlarge This Image 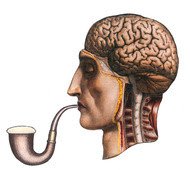 Dan Winters
The doctor listened in amazement as his new acquaintance spoke at length of the chemistry experiment he’d just completed. The friend who introduced them had told the doctor that the man was eccentric and that he conducted strange and morbid experiments. He told the doctor that he had once seen the man beat a corpse to find out if a bruise could form after death. (It can’t.) Indeed, he was so coldblooded, the friend added, it would be easy to imagine the man slipping a friend a drug just to see the effect. Certainly Sherlock Holmes was eccentric, Dr. John Watson thought, but he was also interesting.
It was in this way, in 1887, that Arthur Conan Doyle began one of the strangest and most productive partnerships in literature, with his novel “A Study in Scarlet.” I first made the acquaintance of this odd couple in high school. Recently I found myself dipping again into my well-worn volumes of these remarkable stories, but this time I couldn’t help looking at Sherlock Holmes with the eyes of a doctor. What I saw was what any doctor would see: a patient. The question for me was, Could the strange behavior of Sherlock Holmes be diagnosed?
He does have symptoms. He appears oblivious to the rhythms and courtesies of normal social intercourse — he doesn’t converse so much as lecture. His interests and knowledge are deep but narrow. He is strangely “coldblooded,” and perhaps as a consequence, he is also alone in the world. He has no friends other than the extremely tolerant Watson; a brother, even stranger and more isolated than he, is his only family. Was Arthur Conan Doyle presenting some sort of genetically transmitted personality disorder or mental illness he’d observed, or was Sherlock Holmes merely an interesting character created from scratch?
Conan Doyle trained as a physician at the University of Edinburgh, then one of the most prominent medical schools in the world. He had a keen eye for the subtle manifestations of illness, and his stories are filled with dead-on medical descriptions. The alcoholism of a once-wealthy man is seen in the “touch of red in nose and cheeks,” “the slight tremor of his extended hand.” In another story, the contortions of a body — the limbs “twisted and turned in the most fantastic fashion,” the muscles “hard as a board . . . far exceeding the usual rigor mortis”— allow Watson (and his doctor-readers) to diagnose strychnine poisoning.
It is thought that Conan Doyle was among the first to describe an inherited disease now known as Marfan’s syndrome. First presented in the medical literature in 1896 by a French pediatrician, Antoine Marfan, the syndrome is characterized by a tall and slender build, eye problems and a tendency to develop aneurysms of the aorta at a young age. The rupture of the dilated vessel, which carries blood from the heart to the rest of the body, is the most common cause of death among those with this disorder, and, until recently, few sufferers lived past 40. Jefferson Hope, the avenging murderer of Conan Doyle’s first novel, is described as a tall man in his late 30’s, who kills those he holds responsible for the death of the woman he loved. When finally captured, he tells Watson to put his hand on his chest. Watson reports that he “became at once conscious of an extraordinary throbbing and commotion which was going on inside. The walls of his chest seemed to thrill and quiver as a frail building would do inside when some powerful engine was at work. In the silence of the room I could hear a dull humming and buzzing noise which proceeded from the same source.” Watson knows instantly what this means. “Why . . . you have an aortic aneurysm!”


Is it possible that in his portrayal of Sherlock Holmes Conan Doyle captured some yet undescribed familial psychiatric syndrome? There have been many diagnoses bandied about among fans and scholars, says Leslie Klinger, the editor of the most comprehensive annotated version of the Sherlock Holmes stories. Klinger favors a diagnosis of bipolar disorder, pointing to the detective’s swings between hyperactivity and lassitude. Bipolar disorder does run in families and is characterized by episodes of frenetic energy — often tinted by grandiosity and extravagant behavior — alternating with periods of profound depression. Although it is true that Holmes didn’t sleep for days when in the grips of a case, his mood swings seem tied to his work. When he worked he was electric. When at loose ends, he was melancholic. Drug use might account for the wild shifts in mood, except that Holmes used cocaine when he was idle and depressed, not when he was busy and his mood elevated.

Others, Klinger adds, have suggested that Sherlock Holmes may have had a mild form of autism, commonly known as Asperger’s syndrome. This disorder was reported in the medical literature in 1944 by an Austrian pediatrician, Hans Asperger. He described four bright and articulate boys who had severe problems with social interaction and tended to focus intensely on particular objects or topics. The paper languished in obscurity for more than 40 years, but by 1994 Asperger’s was part of the official psychiatric lexicon. The diagnosis may be folded back into autism in the coming Diagnostic and Statistical Manual of Mental Disorders, but there is no doubt that Asperger’s description of these socially awkward, intensely focused young men resonated with parents who recognized their own children in it.

Holmes often seems oblivious to what others are thinking or feeling, even his dear Watson.

While working, Holmes seems inexhaustible, not sleeping for days. Between cases, he sometimes falls into a state of deep lethargy.

Holmes has extensive knowledge of odd subjects — like 140 different types of cigar, pipe and cigarette ash.
Could Conan Doyle have described this syndrome some 70 years before Asperger? According to Ami Klin, director of the autism program at the Yale Child Study Center, part of the medical school, the fundamental quality that defines all forms of autism is “mind-blindness”: difficulty in understanding what others feel or think and thus in forming relationships. Unaware of how others see them, those with Asperger’s often behave oddly. In addition, they tend to develop extensive knowledge of narrowly focused subjects.
In Conan Doyle’s portrayal, Sherlock Holmes at times exhibits all of these qualities. His interactions with others are often direct to the point of rudeness. And even when Holmes is speaking to Watson, his closest friend, his compliments are often closer to a rebuke. In “The Hound of the Baskervilles,” when Watson, pleased with his own detective abilities, reports to Holmes the results of his investigation, Holmes tells him that he isn’t a source of light but a conductor of light, a mere aid in solving mysteries only Holmes himself can untangle.
As for his interests, Holmes brags frequently of his detailed knowledge of all kinds of strange phenomena. He is said to have written a monograph on the differences among 140 cigar, pipe and cigarette ashes. He demonstrates what Asperger called “autistic intelligence” — an ability to see the world from a very different perspective than most people, often by focusing on details overlooked by others. Indeed Sherlock Holmes boasts that he is able to see the significance of trifles and calls this his “method.”
So where did this picture come from? Biographers have identified a number of individuals Conan Doyle may have drawn on for the character of Sherlock Holmes, but none with all these traits. Was it a patient? A family friend? A schoolmate who didn’t make it into the biographies? We may never know, but clearly Holmes’s peculiarities have a persistent appeal. Just look at Temperance Brennan of “Bones,” Adrian Monk of “Monk,” and, of course, Gregory House of “House,” who exhibit at least a few Asperger-like symptoms and owe much to Sherlock Holmes.