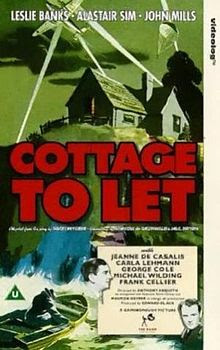 Once again in my quest to watch war time British films, I came across this pleasant surprise viewable at Amazon Prime for free.

Filmed in 1941, set in Scotland, a mystery/comedy spy intrique set on an estate with, as the title claims, a 'cottage to let'.

Early John Mills and an always excelletn Alastair Sims, along with a 15 year old George Cole carry the film.

Watch it to catch the Sherlockian connections.
Posted by JohnF at 8:41 AM