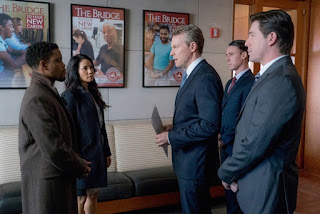 As we discussed last week, the plot is the same, but the names have been changed to protect the writers.

So, yawn on the plot this week.

This week it was mostly a family affair.
With John Noble at times basically playing Sherlocks father and brother.
Emotionally as his father, intellectually his brother.

This episode is once again consistent in that it isn't doing to much of what made the earlier seasons less enjoyable, and more staying true to this seasons approach.
But they do need to come up with some other plots besides rich guy (or gal) protecting crooked company.

The deductible observations this week could have mostly been done by anyone with computer skills and on only rare occasions did observation really have anything to do with the case.

Joan's detective skills once again took a back seat to Sherlock's, which is how it should be but may make Lucy Liu bored with the roll eventually. They will have to keep her  more involved in some way.

My favorite Canonical reference, and the only real one I spotted, was the cab driver who picked up a man who looked an awful lot like Sherlock. A possible and probable reference to HOUN.

So, for lack of something new, but not slipping into any real bad habits I can only fairly give this episode;