And a little more.

To the west of the town is Brook Manor house, a grade II* listed property, built in 1656 for Richard Cabell, Lord of the Manor of Brook.[2] He was the subject of a local legend. It is said that on the night of his death (ca. 1677) black hounds, breathing fire and smoke, raced over Dartmoor and surrounded Brook Manor House, howling. Cabbell's unusual tomb was allegedly designed to keep his restless spirit from roaming Dartmoor.[3] Sir Arthur Conan Doyle based the Sherlock Holmes story Hound of the Baskervilles on this legend. The story's description of Baskerville Hall, however, is based on Cromer Hall in Norfolk.

The hall has a strong literary connection thanks to a visit to the house by the writer Sir Arthur Conan Doyle, most noted for his stories about the detective Sherlock Holmes. In 1901 Arthur Conan Doyle had returned from South Africa, suffering from Typhoid fever. To aid his recuperation, the author decided to take a golfing holiday in North Norfolk, accompanied by the journalist Bertram Fletcher Robinson. The two friends stayed at the Royal Links Hotel in Cromer. During their stay, Doyle probably heard the Norfolk legend of 'Black Shuck', the Hell Hound of Norfolk. The following description of Baskerville Hall in Doyle’s book can also be matched to the exterior aspects of Cromer Hall.
From The Hound of the Baskervilles by Sir Arthur Conan Doyle, originally serialised in the Strand Magazine from August 1901 to April 1902. Unfortunately, Doyle himself said nothing in his autobiography about the writing of The Hound of the Baskervilles. Although the setting for the story was Devon, Doyle's visit to Cromer undoubtedly provided part of the inspiration. 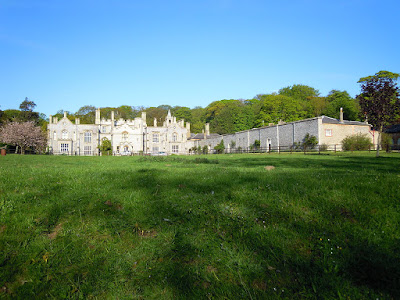 Email ThisBlogThis!Share to TwitterShare to FacebookShare to Pinterest
Labels: HOUN