Looking forward to the return of "Elementary", I must say I was a little disappointed in the fare provided.
The episode opens with Watson heading for a date, while Holmes heads for letters he has been receiving from Moriarty, which he keeps in his bee hives.

Soon a murder/kidnapping takes place involving a wealthy Englishman and his daughter.
The kidnapping is perpetrated by one of Moriarty's henchmen whom Sherlock realizes was the 'voice' of Moriarty when communicating over the phone.

Everyone believes Moriarty is involved in the kidnapping, but that turns out not to be the case.

Although Millers acting was very strong as was several of the other players, I overall found the episode a let down from where the show seemed to be going.

I was looking forward to the return of Moriarty as Holmes' nemesis, but instead the episode returned to the over used co-dependent theme.
I like Natalie Dormer as Moriarty, and was hoping her return meant she was back to take revenge on Holmes and/or Watson. This was not the case. While her character often stated how intelligent she is and how capable she could be at controlling any situation she found her self in, there was very little substantiated proof of that being true. Really more 'all talk and no show'. Several times it is stated how she was at the controls of a vast criminal empire, and she argued continually how she was smarter than Joan (although allowing Joan her due) and Holmes for that matter, but that intelligence never bore fruit. We see that she is obsessed with Joan (the rather large painting), but the obsession is never dealt with.

It would have made an interesting episode if Moriarty had in some way been shown trying to manipulate, from behind locked doors, Holmes into helping her, put that did not prove to be the case. After all, she seemed at some points in the episode of having outside influence, but not at others.

Andrew Howard played a good Devin Casper, his coolness and perceived kindness well masked his darker side. Towards the end, when we found out the kidnapped girl was Moriarty's daughter, his 'wanting to get to know her' may have suggested that he was the father. (and it was not done in a way that made you think his intentions were perverted.)

Lucy Liu's Watson was more sidekick this time than partner, which I think was better, but the case really wasn't strong enough to show off Holmes' skills.

I completely missed why Casper was framing Moriarty. She seemingly was not completely out of the picture of controlling her empire. His role seemed to be that of Sebastian Moran, who probably would not have turned on Moriarty if he had survived his fall.

Although the episode was played for less quarks than usual it did not move far enough away from, once again, Holmes' personal issues for me to enjoy it very much. 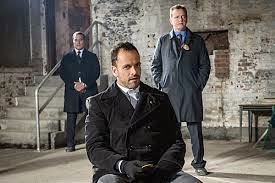 Bees, once again.
Holmes having other 'hides' around New York.
Moriarty at the center of a large criminal association.
Codes and symbols used for messaging.
Reference to Norway.
Use of newspaper classifieds to pass on information.
Holmes asking for all the recent editions of certain newspapers.
Moriarty's reference to 17 ways she had devised to escape may be a reference to 17 steps.
At the end of the case, Holmes setting around his fireplace.

Because of the return to the co-dependent theme once again, and lack of deduction and observation, I can only fairly give this episode;

I was hoping for more.