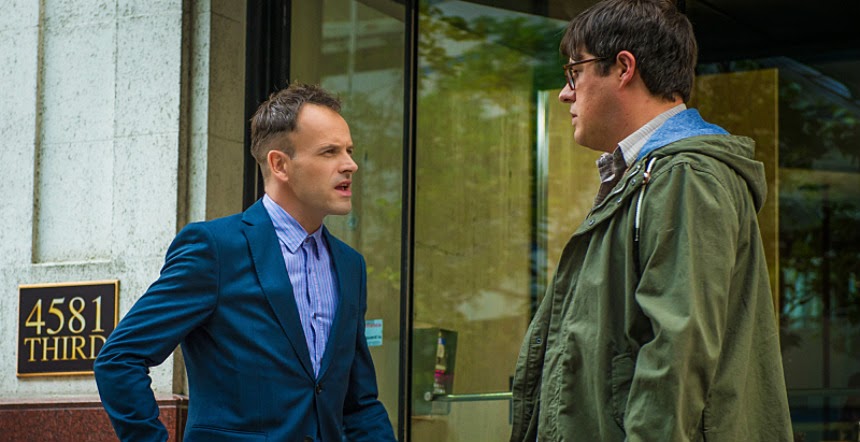 One of last seasons Irregulars, Harlan Emple, math genius, has lots of free time on his hands and spends a great deal of it doing math (half naked) scavenger hunts. In this episode one of these hunts leads to the dead body of another hunter playing the same game.
While the police interrogate him he drops the names of Holmes and Watson as friends, involving them in the investigation.


Although the case tonight did not involve much in the way of Canonical references, the mystery itself was at least a little interesting. Although it would have been more interesting if the math involved more than just games and lottery money. But again, the case was not the important part of this episode, once again.
After having a fairly good story last week, this week we fall back once again on the personalities and how they interact.
Millers Holmes was once again fairly strong Canonically, with, for me, only one unnecessary nod towards being weird. It seems like both 'Sherlock' and 'Elementary' need to throw out something for shock value in each episode. 'Sherlock' would do something like have Holmes show up at the Queen's residence in just a sheet, while 'Elementary' will have Holmes eat some crumbs out of a dead man's pocket. Although the dog biscuit could have been a good lead, the fact that the producers had him eat served no purpose. (This could also explain the producers need to always have Holmes comment on Joan's sex life.)

Where we had discussed a few months back about Irregulars appearing as such in 'Elementary', the question was finally answered in this one. To the extent that tonight that was even Kitty Winters role.
Some time down the road Winter's role in the stories is going to have to change and it will be interesting to see where it goes.
I guess we should also include Phil Simms as an Irregular as it seems he has a skill that Holmes requires knowledge of on occasion.

Tonight was about teaching Holmes what it truly means to be a mentor, as suggested by his interactions with both Winters and Emple.

We do also see the relationship between Kitty and Joan improving.

I do have one question however; How did that tiny mathematician get that really, really big guy into that cabinet? And how do you close the door on an irregular surface with out the moth balls rolling out?

Canoically there was not much to 'Play the Game' with this week. I do however think the knife throwing segment was a nod to Holmes being bored when he has no work.
Other than that. . . . .

Although better than the first episode, it was not up to last weeks and lacked any Canonical references that could have made it fun. With that in mind, I can only give this episode. .