Just in from the BBC - Was Holmes the first caped crusader? 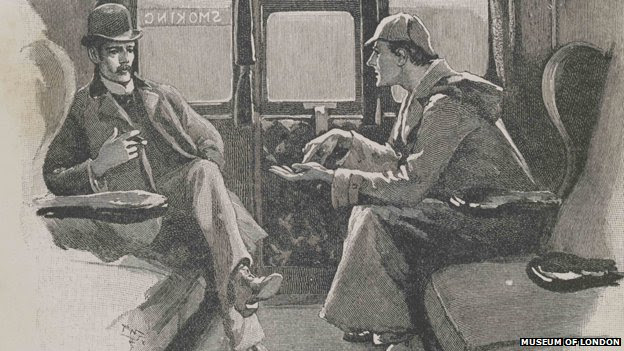 The organisers of a Scottish fashion event have announced plans to reinvigorate interest in the Inverness cape, a sleeveless tweed overcoat made famous by Sherlock Holmes.
Highlands Fashion Week will officially launch its Bring Back The Cape (BBTC) project on its website on 4 December.
Describing it as an "exclusive" and "secret" project, the organisers have said that they hope to revamp the clothing that is usually worn with a kilt and "make it current".
For hundreds of people across the world, the cape as worn by Sir Arthur Conan Doyle's famous fictional sleuth, continues to have great appeal. 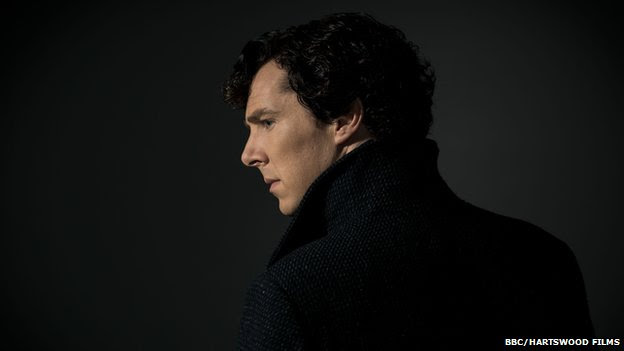 Benedict Cumberbatch's Sherlock has favoured a Milford Coat over an Inverness Cape
How the popular image of Sherlock Holmes' look came about is a curious case.
The illustrated monthly magazine, The Strand, printed many of Conan Doyle's mysteries in the 1890s, with the author's words accompanied by engravings by talented Finchley-based artist Sidney Paget. 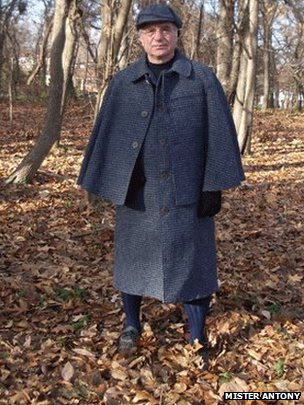 Many Inverness Capes made in Scotland are exported to the US
According to The Sherlock Holmes Society of London, it was Paget who gave the detective his "now iconic image" - the "hawk-like features, deerstalker cap and Inverness cape".
Paget produced 201 Sherlock Holmes's illustrations between 1891 and 1893 and a further 155 between 1901 and 1904.
But Paget had been sent the commission for the artwork by mistake.
Pinacotheca Holmesiana, a website dedicated to Sherlock stories and illustrations, said the job was meant for his younger brother Walter.
Walter still managed to put his stamp on the sleuth. He modelled for his brother's illustrations for the magazine.
Decades later, in television adaptations of the stories, the cape and cap continued to be a key part of Sherlock's wardrobe.
More recent TV portrayals, such as BBC's Sherlock and CBS series Elementary, have since restyled the detective.
In Sherlock, Benedict Cumberbatch's character wears a Belstaff Milford Coat - a heavy, wool tweed overcoat first made in the 1920s and inspired by the late 19th Century great coat.
Yet the image of Holmes in an Inverness cape of more than 120 years ago endures.

Steampunk enthusiasts are among those with an interest in the Inverness cape
Mister Antony (Inverness Cape Specialists) in Newton Mearns, near Glasgow, makes Inverness raincapes in various waterproof fabrics for pipe bands all over the world.
About 90% of the business's work is concerned with manufacturing this garment for pipers and drummers.
In 2003, the firm developed a new waterproof cape called the Bandspec Raincape. The company worked with Robert Mathieson, at the time pipe major with Shotts and Dykehead Caledonia Pipe Band, on the new design. 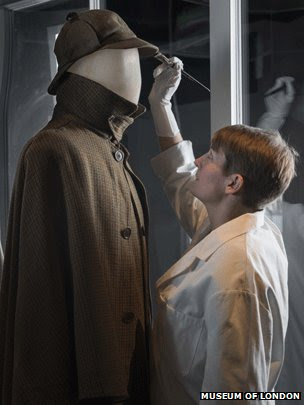 The Museum of London has a new exhibition on Sherlock Holmes
Mister Antony is also one of the few business that makes and supplies traditional wool and Harris Tweed Inverness capes to "professional, discerning" customers.
The patterns on offer include stony blue fleck, grey herringbone and brown and tan houndstooth.
Antony Mistofsky, who has run the firm for 32 years and whose family has been making waterproof clothing for more than 100 years, said the custom-made items represented "a specialised, niche market".
He said: "It would be fair to say that they are not a big selling item.
"We sell hundreds and not thousands of them. They can cost upwards from £600 depending on what the customer wants."
Mr Mistofsky added: "We export them all over the world. Sixty to 70% of the woollen capes are exported, mainly to the USA.
"The customers who want these items are mainly professional individuals - lawyers and doctors, a High Court judge - and they buy either to wear with a kilt or as an alternative to a heavy overcoat."
'Global icon'

A few of those buying the woollen capes also have a keen interest in Sherlock Holmes, he said.
Other Inverness Cape enthusiasts include fans of steampunk, a genre that mixes Victorian-style clothing with science-fiction technology and draws inspiration from writers such as HG Wells. Various online retailers offer the capes in colours suited to steampunk aficionados.
Highlands Fashion Week's BBTC project, meanwhile, is timely.
Last month, Museum of London opened the exhibition Sherlock Holmes: The Man Who Never Lived and Will Never Die.
It features displays of Conan Doyle manuscripts, copies of The Strand and some of the 27 surviving original drawings Paget did for the magazine stories.
The museum also commissioned a new tweed of a design and colour inspired by the trademark deerstalker and cape.
Alex Werner, head of history collections at the museum, said: "Sherlock Holmes is a global icon indelibly linked with London, so it is fitting that we are able to host this major celebration of Conan Doyle's creation at the Museum of London.
"This exhibition is really about gaining a deeper appreciation of the stories and it is a once-in-a-lifetime opportunity to see such a diverse collection of Sherlock Holmes artefacts and material under one roof."
The museum exhibition runs until April next year, while Highlands Fashion Week takes place in Inverness next month.

More on This Story