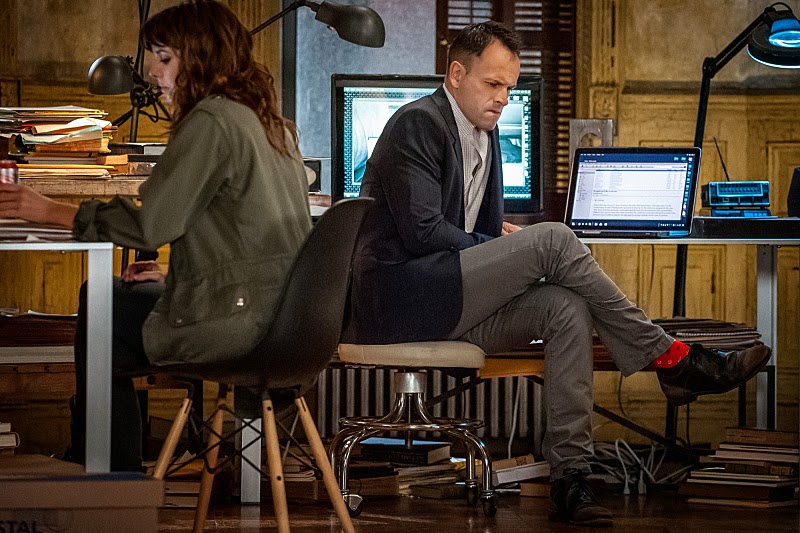 The episode opens with a women walking down the sidewalk, talking on her cell, and she steps into a rather deep puddle (what do you expect when you talk on the phone while walking). Uncovered in the rather deep puddle, is a severed hand.
But no body.
Holmes and Kitty are called in to consult, at which time Holmes does some rather nice deductive work to explain where the body may have ended up.
Now the rest of the mystery is rather unimportant, because it once again becomes overly convoluted and does not really have anything to do with the episode. The episode once again suggests how unimaginative the writers can sometimes be when writing motives and criminals. And the need for some sort of grotesque crime.

The episode did however give some the other characters in the show a chance to stretch their acting wings a little.
Gregson actually had a story to participate in, and although it came rather out of the blue, it allowed his character a chance to show a little depth.
This is also the first episode where the character of Kitty actually seemed to serve some purpose other than as an irritant. She actually shows enough emotional depth to be not only a help to Gregson, but also to Holmes, who we now have to view as a character who is going to be growing and changing throughout the series. Kitty actually seemed much more capable when not in Joan's shadow. And to be honest, where Canonically we see Holmes and Watson as almost social equals (manners, habits, how they view the world), I have always had the impression in 'Elementary' that Joan has been a little more up-scale than Holmes and that the partnership was always going to be a little strained. Holmes and Kitty seem suited for each other. (Could be the accent thing of course.)

Joan was completely absent from the episode, and for me, was not all that missed. I think Lucy Liu is a very capable actress and could handle any role of Watson that is given her. I do, however, not like the sidekick as equal roll her character is taking, so I found it nice see a sidekick who was just a little less than equal to Holmes skills. I am however of the camp that thinks something big will happen to Kitty because she is turning to much into Watson, and we don't need two Watson's.
Kitty's relationship with Gregson was a pleasant surprise and it gave us a chance to understand a little more about the motives of the two individuals.

I liked the fact that the episode explored Holmes' feelings about Watson's writings, although I believe it was handled, at least his reaction to it, in the usual 'Elementary' childish way. Which now since we see that that is how the show is going to handle most things Holmes finds uncomfortable, we can accept it as the norm and move on from it being unnecessary. We do hear Canonically how Holmes sometimes finds Watson's writings an irritant, but we never really learn how he feels about it. It first comes across as something Holmes finds a complete waste of time. But then eventually we are lead to believe Holmes finds it somewhat flattering. Canonically we also find Holmes is not against others learning of his methods. He is however not a fan of the seeming dramatization of his works.

The case itself, once again, contained to many irrelevant points.
Why was the body stuffed under the car in the first place?
Did the bodybuilder actually look for a key before he ripped the hand off?
Are lawyers so bad in NY that once again they can be bribed to help commit murder? I believe we have seen that plot devise a couple of times.
Would the bodybuilder really roll over that quickly, and what was he already going to jail for anyway?
And surely the body builder knew the case was going to be attached and would have brought some bolt cutters along. Even if he did have the strength to rip a hand off, surely bolt cutters would have been quicker.
The body builder also had no other record other than substance abuse, would he really have been talked into to murder so easily.

Canonical references I imagined;
Holmes' lack of interest in keeping up his paperwork and filing.
His laying on the ground when looking for clues.
His apparent dislike of Watson recording his cases.
The use of dummies to replicate the severing of a hand is reminiscent of BLAC and seeing how much force it would take to harpoon a body and pin it to a wall.

I was hoping the scene where Holmes takes on the body builder in a show of strength would be reminiscent of the Canonical poker scene,

The episode lacked really good deductive and observational craft but made up for it in character I believe. If we, again, now accept that that is what the show will be about, we have to use that as one of the key points of judgement.

On character I give the episode a four, on the case and plot, a two, so on the average I give it;

I did also enjoy this review.