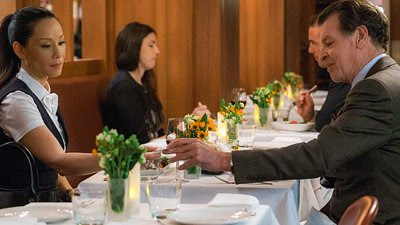 This episode involves the murder of a Russian crime boss, a valet and the murders themselves.

This episode also suggests that at least for this year 'Elementary' as found itself a comfortable routine and is staying the course.

Although there are still at times hints of outlandish behavior from Miller's Holmes, for the most part it is kept in check.

The plot had some good turns in it, and the observation of some of the clues were Sherlockian like.

The side story involved Holmes' father getting in touch with Joan seeking her professional advice.
Joan deduces that there is more to it than that.

I enjoyed the line from Holmes's father about Holmes' eating habits and the reason he eats.
The observations on the effects of street lighting on the color of cars was good.
That scene also showed Holmes' knowledge of his city, much like the Canonical Holmes does of London.

This is the second or third episode this season I believe where Joan is not in on the conclusion of the case. While Canonically Watson is present in most, he usually only takes the roll of observer and not fellow detective. Is this 'Elementary's' attempt to put more emphasis on Holmes skills as an individual and not a team.

It will be interesting some day if an annotated 'Elementary' is ever produced to see how many of the plot lines involve industrial espionage. The plot line is starting to get a little over used.

One good discussion point that could come out of this episode is how timely were the topics in the cases of the Canonical Sherlock Holmes. Doyleockian, would do you say?  We know some were definitely; submarines, international interests, etc.
Many of the topics in the cases on 'Elementary' can often seem to be covering things recently in the news. The remote control of cars computers was a topic not to long ago on one of the hour long news programs.

It was nice that there was at least one wild car ride to make the guest from 'Dukes of Hazard' feel at home. Although he was not in that scene.

As has been a problem with this show all along is how to bring in things we expect from a Holmes like character without out making it a costume drama involving deerstalkers and capes. And without making it seem a copy of other adaptations of Sherlock Holmes. Miller can obviously not be Brett and he has to also avoid coping things seen in 'Sherlock'. I think the show is getting better at it this year, but is still not quite there.

For all the above reasons, having still enjoyed the episode I can fairly give this one;