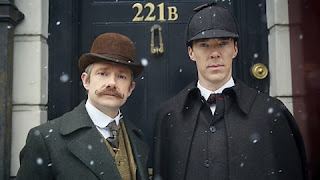 During my second viewing of "The Abominable Bride' I tried to mark down each time I went from liking the episode to not liking it by placing a little tick in one category or the another on a note pad.
I soon found that the categories were keeping pace with each other as I went back and forth.

This exercise had started out as an attempt to find a different way of examining the episode that may not have been done before.

Most times when we watch a TV show or movie, or for that matter, when we see a play or read a book, we find that we either like it or we don't. Many times we can still like something while finding something in it that we don't like, but still on the whole giving it more thumbs up than thumbs down.
Example for me, the first Lord of the Rings movie.

And the opposite can also be true. We can on the whole not like something while still finding something within that we do like. Example for me, The Hobbit movies.

I did not finish my second viewing with my little list of check marks. I found that once, after the first viewing, we learn the whole episode was just a trip into Sherlocks 'Mind Palace' the experiment was a waste of time.
One can hardly find fault with the episode if it is just viewed as a trip into Sherlocks unconscious mind. Most of us have had dreams that make no sense or that can be taken many different ways by whom ever may wish to interpret them. They could just be the result of a little under cooked beef or a tiny bit of mustard.
And just like with Sherlock, must of the times when we visit our 'Mind Palace', the journey ends right before we get where we really would like to see it go;)

The check list attempt actually proved rather disappointing in that for every time I was starting to like the show I would end up equally let down by some turn of event.
While one mount enjoying the dialog, the next disappointed in a flip response or an out of character turn of phrase.

In my post on Jan. 13th I asked the question; "Without a Clue, Part Deux"?  And while 'Without a Clue' at times tried to have serious side to the story most of it was clearly played for the humor.
As has often been the case with 'Sherlock', we are never clear which way it wants to lean and for me is not pulling either one off as well as I would like.
Most times when fun or funny things happen in our lives they blend in with our 'story line'. And in most dramas when humorous occasions happen they in no way attempt to confuse the fact that we are watching a drama.
'Sherlock' is always blurring those lines in an almost slapstick kind of way. (Many may find that appealing.)
Again, the episode took place in his 'Mind Palace', so we can hardly fault it for being confusing.
Any attempt to navigate my 'Mind Palace' would be equally confusing.

I must admit that I fall into the camp of "hoping for a Victorian Sherlock Holmes tale starring Benedict Cumberbatch and Martin Freeman" to hold us over till the regular series gets filmed again. But I fear, which my be fair, that this episode left a lot not caring if the show continues, but okay if it does.
The story arc was not advanced. Mostly it was just about putting a teaser out there again, like they have been doing for the last couple of years.

There were some wonderful nods to the Canon, the Granada series and Paget drawings.
The sets were wonderful. And I was not bothered by the flash back scenes from 221B to the crime scenes. It was inventive and worked okay with that part of the story.

Much of the dialog was witty and very inventive. It was mostly appealing if you accept the story line as, once again, taking place in a 'Mind Palace'

I found the scene where Watson first finds Holmes in the morgue rather disturbing and once again seems to prove that the producers want to prove Holmes is indeed a sociopath.

I have never liked the portrayal of Moriarty in this series and believe that portrayal only adds to the sociopath explanation.

While we have come to expect a deerstalker making an appearance in most Sherlock Holmes adaptations, it does not suit the Holmes in 'Sherlock'. Something about it always looking to new or to pressed. I think it can also be said about the Iverness.

I have never considered myself a 'scholaly' Sherlockian. I don't put myself in those ranks.
I would rather find a beer connection in the canon than spend time researching find out how old the pig would have to be for the harpoon to go in so far in BLAC.
I find myself more likely to read The Strand than the Baker Street Journal.
I read the stories more for the atmosphere than for trying to add stuff to my 'Mind Palace'.
And while I am at it, I must admit that it was only after reading several other reviews that I actually caught some of the things they talked about. Many of them I agree with, some I do not.

But it was not until I watched 'Elementary' this week that I really realized what it was that I really did not like about thiss episode and in some ways 'Sherlock'.
I have come to realize that the Holmes in 'Sherlock' is not someone I would really like to meet.
I find his character a little disturbing and very borderline. Where Canonically, as well as in 'Elementary', we see the relationship between Holmes and Watson as good for one another. In 'Sherlock' I can see the relationship dragging Watson down.
Brett as Sherlock Holmes did not suffer well fools. Cumberbatch's Holmes would rather make someone feel the fool.
There is a manic quality to 'Sherlock's' Holmes that seems un-fixable or un-changable or lacking in the ability for growth. He seems damaged beyond repair many times.

It may be a product of our time, the anti-hero being the hero. The more damaged you are the more appealing you become as the hero.

As has been the case since the early episodes, The Abominable Bride was written for the fans of 'Sherlock', not the fans of Sherlock Holmes.

And although 'Mind Palace' is a historical phrase, when used as it is in 'Sherlock' it appears more Fanfic than Sherlockain.

But with all my complaints about the show, I still think Cumberbatch and Freeman are two of the best things to happen to Sherlock Holmes in a very long time. And I still enjoy the show for it's 'Playing the Game' exercise.

I do not however consider this episode to be a respectful nod to the Canon of Sherlock Holmes.

But I can only fairly give it;

To bad it wasn't Elementary:)