Once I get past the fact that I don't like the relationship still developing between Mycroft and Joan, and the fact the Sherlock's reaction to this relationship (and many other things) is really immature, I rather liked this episode.
Mycroft reveals to Joan, and later Holmes, that he works for the British secret service, and eventually we find out he has for a long time.
Mycroft had gotten out of it, but, eventually, to save his brothers reputation, becomes involved again, which leads to Sherlock and Joan also getting involved.

Once these revelations are made to Sherlock, other than the reason for Mycroft's re-involvement, he is invited to, appearance-wise, the "Diogenes Club" for spies and asked to work for "Queen and Country" to help find out if a recent murder is connected to MI-6.

We are not sure if he does this because the case interests him, or to get back at his brother.

The episode suffered again from it's need for grotesques crimes, but if that part of the story develops (with Sherlock solving that mystery and the code on the arms) it could prove interesting. (Then again, Cadogan West probably didn't look to good after coming of the train.)
And it still suffers from the over use of Sherlock's drug habit as the driving force of his personality. 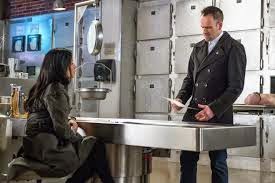 The episode was full of good Canonical references.
'Cadogan' West.
Mycroft's involvement with the British Government.
Sherlock's unorthodox methods noticed by others.
His affection for Watson, and his inability to express it.
A building with the real atmosphere of the Diogenes Club and its offering of a space where like mind men can 'hang-out'.
12B.
And although some may say West's ex-wife walking in and giving Holmes so much information is a lazy way to handle the story, when in fact in BRUC West's  fiancee provided Holmes with some valuable clues.

I loved Joan's explanation on where she stood on Sherlock's personality.
The relationship seems a little in trouble however, and it is going to be interesting to see how it is handled.
Because of the nature of the short story, Canonically we never got a look at how Watson's other relationships were handle in the Canon. Of course times were also different and such things for the most part were not handled the same. However, if we remember, Watson did have experience on several continents, so, indeed, how did he handle it.
Canonically Watson left because he got a private life. On "Elementary", Watson is leaving to get one.

Canonically we sometimes wonder why the relationship between the Holmes brothers is so limited, Mycroft only appearing in four stories. So if nothing else and even if we don't like it, "Elementary" is filling in some of the details.

Hopefully next season Joan will be allowed to develop a relationship with someone Sherlock does not despise and someone we Sherlockians can Canonically except. After all we are never lead to believe Sherlock did not like Mary.
If the relationship changes between the brothers, it will be interesting to see if Sherlock still has problems with Watson getting together with his brother.

Mostly because of the wealth of Canonical references in this episode, and the twists in the case, I can happily give it . . . .

Here is another review I rather liked. . .