My daughter, now eight, has been enjoying playing the game CLUEDO, known over here as simply CLUE, since borrowing it from heer cousins. 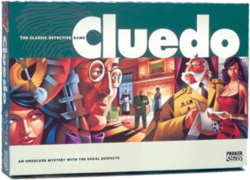 I never had a clue, even if tenuous, that there was a Sherlockian connection.

Cluedo was originally marketed as "The Great New Detective Game" upon its launch in 1949 in North America, and quickly made a deal to license "The Great New Sherlock Holmes Game" from the Sir Arthur Conan Doyleestate. Advertising at the time suggested players would take on the guise of "Sherlock Holmes following the path of the criminal", however no depictions of Holmes appears in the advertising or on the box. By 1950 the game was simply marketed as "The Great Detective Game" until the 1960s, at which time it became: "Parker Brothers Detective Game". 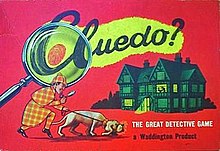 Cluedo 1956 UK Edition depicting a Sherlock Holmes type character.
But the association with Sherlock Holmes was far from over. With the launch of the US 1972 edition, a television commercial showed Holmes and Watson engaged in a particularly competitive game. Adjusting with the times, in 1979 US TV commercials a detective resembling a bumbling Inspector Clouseau from the popular Pink Panther film franchise, looks for clues.[16] In 1986, the marketing slogan added "Classic Detective Game" which persists through the last 2002/2003 edition.
In the UK, Cluedo did not start using "The Great Detective Game" marketing slogan until the mid-1950s, which it continued using it until the 2000 edition when it adopted the "Classic Detective Game" slogan. However, in the mid-1950s Waddingtons also adopted a Sherlock Holmes-type detective to adorn their box covers for a brief time, though unlike the US editions, there was no acknowledgement that the character was actually the famous detective. In the 1980s, as in the US, Sherlock Holmes also appeared in TV advertising of the time, along with other classic detectives such as Sam Spade.

Just thought you may want to know.