Will it be worth waitng for? 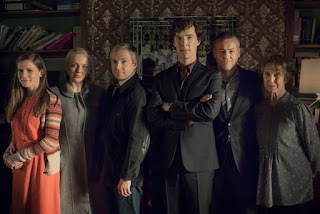 Fans of the British crime series "Sherlock" may need to wait until 2017 for the much-awaited fourth season of the hit series. Reports are pointing to the start of production sometime in 2016 and a 2017 release. The series' producers however have yet to confirm if these reports are true.
According to a report in Christian Today, what is so far confirmed is that for 2015, fans should just be satisfied with a special holiday episode of the series which is a stand-alone episode that will bring back the enigmatic sleuth and his partner to the Victorian era.
The holiday special, which has already wrapped up production, is set in Victorian London. This is straight out of the era that Sir Arthur Conan Doyle, the author of the Sherlock Holmes novels, pictured Holmes to be living in and solving mysterious crimes that came his way. In early July, BBC released promotional photos and a teaser trailer showing the crime-fighting duo looking dapper in their period costumes.
Series co-showrunner Steven Moffat said this about the special: "We've got, I think you can safely say, the Sherlock Holmes and Dr. Watson of a generation – we want to see them do it in the proper outfits, just once." He also clarified that the special episode is a "special antecedent installment of the series."
"The special is its own thing. We wouldn't have done the story we're doing, and the way we're doing it, if we didn't have this special. It's not part of the run of three episodes. So we had this to do it – as we could hardly conceal – it's Victorian," the executive producer explained.
The series started in 2010, when it aired three episodes for the first series. The second series of episodes was aired in 2012 and the third series in 2014. Despite the length of the wait between seasons, the show has managed to become one of the most-watched shows in contemporary British TV.
Source and credit
Posted by JohnF at 11:20 AM