The "Devastating" Sherlock Season 4: What Will Happen to Mary? 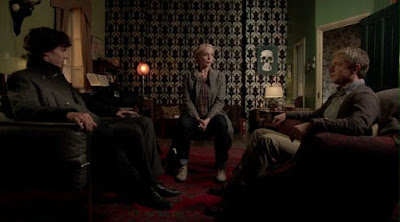 Every time new information comes to light about the next season of the BBC's critically acclaimed Sherlock, everything just seems to get a little darker.
Speaking at Comic-Con last month, co-creator Stephen Moffat revealed that even though they're still in the early stages of writing they're really planning to up the ante this time around:

“We know very, very clearly what stories we’re doing. Where each episode goes, what the shattering, emotionally draining, you’ll never be the same again and you’ll never stop crying cliffhangers will be.” - Stephen Moffat

Wonderful.
Interestingly enough, according to the creators, the Moriarty mystery is something that's going to be wrapped up in the Victorian Christmas Special. So if that story-line is going to be all resolved before season 4 even starts, where does that leave us?
Well, a lot of people are speculating that the tragedy that Moffat speaks of will arrive in the form of the death of Mary Watson (Amanda Abbington).
It would make a lot of sense; given what we know of the character's murky backstory and the events of the season 3 finale, there's definitely something that she's running from. Add to that the fact that in the original story Mary and John only had a short marriage and it's not looking good for her.

"She was blonde young lady, small, dainty, well gloved, and dressed in the most perfect taste. Her face had neither regularity of feature nor beauty of complexion, but her expression was sweet and amiable, and her large blue eyes were singularly spiritual and sympathetic."

The Conan Doyle character Mary Morstan is a governess introduced in The Sign of the Four when she approaches Holmes seeking help. Her father, a Captain in the British Indian Army disappeared ten years earlier and following the death of his friend, Major Sholto (who you might remember from The Sign of Three) she had anonymously received six pearls in the mail, one per year for the last six years. The last pearl was accompanied by a letter telling Mary that she has been wronged in some way. She suspects that this is related to her father's disappearance a decade earlier, so takes the case to Sherlock Holmes.
They meet with the Major's son and discover that he's the one who has been sending the pearls; his way of providing compensation after her father died of a heart attack unbeknownst to her during an argument he had with Major Sholto. They were arguing over a treasure that Sholto had brought from India and, fearing he would be blamed for the Captain's death, Sholto got rid of his body and hid the treasure, which our heroes then embark on a mission to find. Along the way John Watson and Mary fall in love, and they become engaged at the end of the story. They marry a year later, in 1889.
And... That's kind of about it. She doesn't make any other appearances in the Conan Doyle stories. Her name crops up in conversation during a few of the stories but there's no significant mention of her until The Adventure of the Empty House (adapted in Sherlock as S03E01 - The Empty Herse). This short story is set after Sherlock supposedly died at the Reichenbach Falls in The Final Problem, three years earlier, and it marks his return. At his point we discover that Watson is now a widower. Sherlock comments briefly on the fact that Mary is dead, but her cause of death is never clarified. Since her date of death is unknown, I estimate they were married for between 2 - 5 years in the books.

Will our Sherlock Mary go out the same way?

"While we play fast and loose with the original stories, we generally follow the trajectory of what Conan Doyle did. So [John] gets married, and then Mary dies – so at some point presumably she’ll die." - Martin Freeman

In a Telegraph interview earlier this year Martin Freeman spoke about the possibility of killing off his on-screen wife, and he for one seemingly would not be surprised if that does end up happening.
Then again, Mary and John are about to have a child, and killing off pregnant women isn't a popular twist for this kind of show. Killing her off after the pregnancy would have narrative consequences too, as it would leave John a single father and therefore restricted by this role. Logistically the show may also benefit from having a more central female character in it, especially as Moffat has spoken about the difficult in adapting the "sexist" original stories.
Mary's character has been met with mixed reception, but I for one quite liked her. She's not without her faults, and I think we could do with a little more clarification on her past, but as John so aptly put it: "The problems of your past are your business. The problems of your future are my privilege"
Let's just hope that she has a future to look forward to.