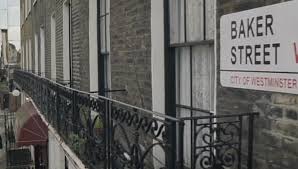 Property prices in London have skyrocketed, and British police say money being laundered by international criminals is now the biggest factor driving the boom.


MELISSA BLOCK, HOST:
Britain has long been a safe haven for people fleeing persecution in their home countries, but now anti-corruption campaigners say the narrative has changed. The U.K. has also become a safe haven for dirty money, and a senior police officer claims money laundering is the biggest factor driving up London property prices. Vicki Barker reports.
VICKI BARKER, BYLINE: Baker Street in Central London - Chido Dunn from the anti-corruption organization Global Witness is looking for something that isn't there - 221 Baker Street, home of the fictional detective Sherlock Holmes.
CHIDO DUNN: So we're looking at 219 Baker Street, which is a...
BARKER: What is there is a vast art deco building that takes up most of the block.
DUNN: If 221 Baker Street had existed - if Sherlock Holmes had ever existed - that's where the property would be located 'cause it's such a big block.
BARKER: The building's real ownership is equally elusive, but Global Witness has traced it to the late Rakhat Aliyev, a shadowy Kazak businessman with links to the ruling family. Aliyev was found hanged in an Austrian prison this winter while facing multiple European money laundering charges.
A short walk away, in the leafy splendor of Regents Park, Dunn explains that the same things that make London such an attractive destination for tourists and ex-pats also appeal to dictators, drug lords and common crooks.
DUNN: It's got great schools. It's got great shopping. It's also a really secure place if you want to put your dirty money. It has a really secure system of law, and its property is a great investment.
BARKER: An estimated $200 billion worth of property in the U.K. is owned by offshore companies, and much of that is concentrated in the capital's most desirable neighborhoods. In the wealthiest, Westminster, one in five property transactions now involves a foreign buyer.
JONATHAN HUDSON: There's the properties that start from four-and-a-half million.
BARKER: In SoHo, where the sex shops and bohemian bars are slowly being edged out by upmarket restaurants, cafes and condos, realtor Jonathan Hudson says he's never had a shady client, and he's confident he can spot one.
HUDSON: If you can prove where your cash is from - can we have it from a lawyer, or can we have a copy of a bank statement? And if they're then quite a little bit cautious about giving their information, that would be the first red flag for us.
BARKER: But not everybody finds differentiating between dirty money and the merely filthy rich so easy, especially when realtors can earn hundreds of thousands on a single sale.
UNIDENTIFIED CHOIR: (Singing) (Unintelligible).
BARKER: In a courtyard in the shadow of Westminster Abbey, as a choir rehearses nearby, I meet Mark Hayward, head of Britain's realtors association. He's well aware that his colleagues are legally required to report any suspect clients to anti-money-laundering authorities. He's also aware only a tiny number of them do so, and he says that's going to have to change.
MARK HAYWARD: I think government has now got the bit between its teeth. And the National Crime Agency, which is the equivalent of your FBI, has been targeted, and our sector is at the top of their hit list.
BARKER: Later this year, the British government will begin publishing the names of all foreign companies that own property in Britain. Anti-corruption groups called that a start, but they say the real owners will likely still remain in the shadows. For NPR News, I'm Vicki Barker in London.
Copyright © 2015 NPR. All rights reserved. Visit our website terms of use and permissions pages at www.npr.org for further information.
NPR transcripts are created on a rush deadline by a contractor for NPR, and accuracy and availability may vary. This text may not be in its final form and may be updated or revised in the future. Please be aware that the authoritative record of NPR’s programming is the audio.
Source NPR
Posted by JohnF at 6:26 AM