Elementary S3E6 - 'Terra Pericolosa' - What do you get when you have three Sherlock's in the same room? 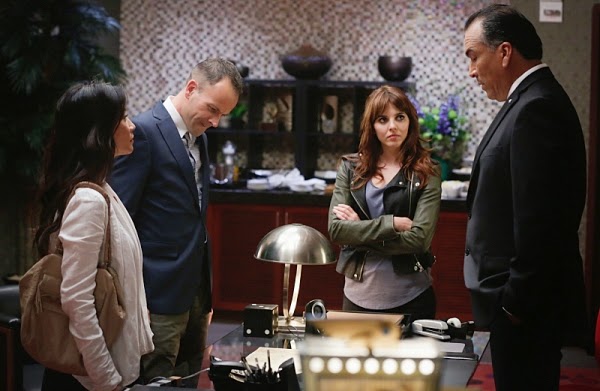 I love maps. Who doesn't.
They promise adventure, hope, new places.
Old ones can offer adventure.

Think of how many tales we have watched or read that start with maps.

Looking at maps can bring back fond memories of past family trips.

New maps help us plan and dream about future adventures.

I have a favorite map of Nepal that still brings back great memories of a past trip.

In this episode Holmes Inc. gets involved with stolen maps and a murdered security guard. Which leads to another murder. Only one of the stolen maps is relevant to the rest of the case, which involves land boundaries from a previous century.  Of course there still is no honor among thieves, so almost everyone involved with the stolen map must die or is slated for death if Holmes does not solve the case first.

The case of the stolen map and its subsequent coping and re-coping is pretty could. It takes several good twists and turns and involves several interesting characters.
Although we didn't see very much of the leg work involved some good investigation was to be had, if not many good Sherlockianisms.
Ms. Hudson is mentioned but not seen.

Yes, the case was very strong in this one, but it was still more a story about the personalities involved and their relationship to each other and Holmes and Watson's jockeying for position as lead detective, with Watson failing so far. To give the episode a little credit, Watson's roll was much diminished and she was more of a sounding board than anything this week.

The bound seems to be growing between Kitty and Holmes, with Watson's help. And it is interesting to see Holmes' realization of the importance of this bound. And it is setting up for a good story line if something happens to that relationship.

Most of the important detective work was done by Sherlock in this one, with Kitty coming in second and Watson bringing up the rear. But even with that hierarchy, there were two too many Holmes'. Considering how we keep looking for more Holmes like characteristics having that search spread out over three characters will make the likelihood of that happening almost nonexistent.
This show does have the difficulty of finding enough for a convincing Watson to do and still remain relevant as a Boswell. You can't dumb him (her) down so much that he (she) just becomes the straight man to Millers Holmes. And yet it is not working as it is with everyone remaining as Holmes' almost equal.
Although Judd Law as only had to pull it off in two movies so far, his Watson worked. As has Freeman's in 'Sherlock'. Again, neither have had to do it over so many shows. But both have found away to play a smart Watson without over-shadowing Holmes' talents.

The relationship between Holmes and Kitty was interesting to watch this week, and is suggesting, at least to me, that something big is going to happen in that area. Will Kitty die? Is Joan going to leave the show? (I don't think that will happen.)

One thing that has been mentioned by another blogger is the fact that in most episodes the main criminal is introduced in the very beginning as a seemingly unimportant individual, who then turns out to be the real bad guy. Canonical quiz for today; Canonically, does that happen very often in the, well, Canon?

We heard nothing about Joan's trip to Denmark and saw nothing of the boy friend.

The turtle was just present briefly.

If the show continues in this way, it should be called the Three Holmes'.

For that reason I can only, for a good story, but too many Holmes' and lack of Canonical references;