Broadway to Welcome Return of Sherlock Holmes in New Play
By Carey Purcell
18 Dec 2014
Sherlock Holmes, the famous detective created by Sir Arthur Conan Doylewho has been featured in stage, film and written works, will return to Broadway in 2017, producers announced Dec. 18.
Produced by Antonio R. Marion and Kimberly Much, Sherlock Holmes, by British writing team Rachel Wagstaff and Duncan Abel, will explore Holmes' personal history as he solves a new mystery.
"Staged as a mystery within a mystery, the case presented to Holmes forces him to confront his murky past," press notes state. "But is the unravelling of his childhood just a dangerous diversion? Sherlock Holmes is an original tale which will offer a new and deeply theatrical exploration of the mind of the famous detective, while remaining faithful to the mysterious world created by Sir Arthur Conan Doyle."
"The character of Sherlock Holmes has inspired storytellers of all mediums to weave thrilling tales for more than a century. What we are most excited about is the opportunity to draw on such rich source material, and present it in a totally fresh way by using the kind of magic you can only find in live theater," producer Marion said in a statement. "Our version of Sherlock Holmes will have all the elements that fans want and expect, but with new twists and turns and plenty of surprises, which will take these amazingly complex and beloved characters to places they've never been."
Abel and Wagstaff collaborated on the radio drama When I Lost You. His writing also includes the novel "The Way Home" and the story "A Good Son." Wagstaff's stage works include Birdsong, The Soldier, Night Sky and Full Time, among others. 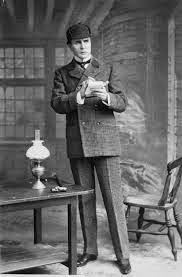