S3E7 - 'The Adventure of the Nutmeg Concoction' - Nutmeg and sour milk - Review catch up time. 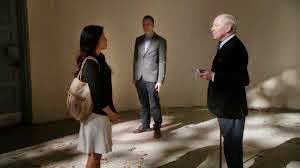 While preparing lunch or dinner, Joan has a client stop by. The client is looking for her sister who disappeared five years earlier, and the police and the FBI are once again clueless. Joan continues to make the meal.
Joan takes the case.
Kitty stops by and without permission informs Holmes of Joan's new case.
Holmes is bored from lack of work and wishes to 'help' Joan with her investigation.

Getting the client was actually about the only work Joan accomplished this episode.

The disappearance of the missing girl and several other victims involved a crime scene clean-up guy who no longer felt he was being paid enough by the cops to clean up crime scenes, so instead retires and starts working for the people who make the mess.

The case was interesting and the plot well done. It had a few twist and turns that made it watchable.

Holmes is still unable to leave Joan's love life alone, and although irritating throughout, in the end he did make Joan examine the types of relationships she gets involved in. This theme was also examined in the RDJ and Jude Law films.

Kitty once again out Watson's Watson, or should I say out Holmes' Watson, for it seems we are into a three detective TV show. Watson has almost been put back into a more Watson-like role this season. That I would suggest will change once again by the end of the season. I can not see Kitty staying on as such a strong character, which does not bode well for Kitty. Joan's involvement has really taken a turn this season that can not last in it's current form.
Matter of fact, Joan never really gets too mad with Holmes taking over her case and although involved in some of the discussions, I can not think of one clue that she found this week, which is kind of surprising since for a while we were complaining that she was becoming to Holmes like.
Kitty actually did the work on 'the case of the old boyfriend'. Joan's involvement was more along the line of the erroneous Watson of 'Hound'.

New 'Irregular' 'The Nose', played by John Horton, was my favorite participant in this episode.

Clyde was absent, but Mrs. Hudson made a brief appearance.

Some Holmes like references;
Irregulars
Mrs. Hudson
Holmes being foul tempered when bored

Although I found the rehashing of Holmes' involvement with Joan's love life at the beginning a little tiresome, it did take a turn that suggested something along the lines of sincerity. The case was good, as was the investigation and deductions. I did enjoy this episode more than most. For that reason I give it;

Which brings us to the Canonical discussion of the episode; Since Watson's wives only make (other than in one story) brief appearances, some times without their name being mentioned, in the Canon, is Millers Holmes observation of Watson's relationship a fair and accurate one? Was Watson, who had relationships on several continents, suited for a long term partnership or was he suited for a more casual love life?